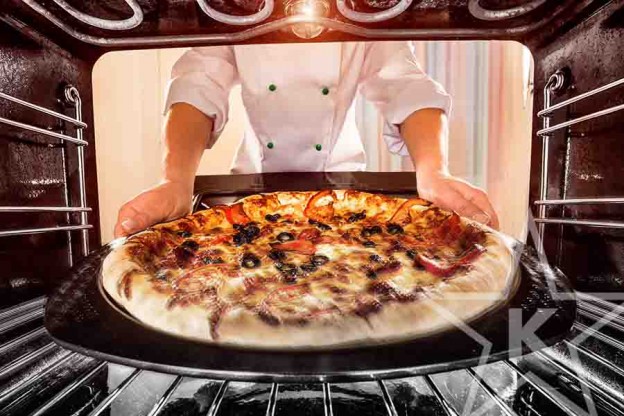 If your kitchen is equipped with four ovens – for meat, dairy, pareve and fish you don’t need to read this article. However, if you do not have such a luxury, you will find various halachic details enumerated below quite relevant.
There are numerous factors involved in an oven “going back and forth” between meat and dairy or using an oven for fish or pareve.1 They include the following: a) The oven – Is it clean? Was it kashered? When was it last used? b) The food – Is it liquid? Is it covered? When was it prepared? c) Does the question arise to do the action l’chatchila (I can do this) or is it only okay b’dieved (it already happened)?
Note: The halachos addressed are based on the psak of HaRav Moshe Heinemann, shlit”a, Rabbinic Administrator of STAR-K Kosher Certification.2 The article addresses only the issues involved with regular gas or electric ovens – not cooktops, toaster ovens, broilers, microwave ovens, grills, double ovens, warming drawers, blechs, or hot plates. These appliances are beyond the scope of our discussion. It also does not address oven use on Pesach.

FOOD & OVEN CATEGORIES
There are two types of dishes that can be prepared in an oven. Dry3 foods (e.g., bread dough) create reicha (aroma). L’chatchila, we are concerned that reicha will impart its aroma into other food in the oven. However, in general, reicha from “dry” food has no impact on other keilim (vessels) in the oven.
Liquidy foods (e.g., a pan of meat that has gravy) create zayah (steam). Under certain conditions, zayah will cause other “opposite” foods and keilim in the oven to become non-kosher. If the pan is covered, there is generally no zayah (or reicha) issue, even though some steam might escape.
Foods that are “charif”, including spicy or hot foods (e.g., a dish with hot sauce) may also impart flavor when cooked uncovered in an oven.
Another important factor is when the oven was last used. An oven that was used within the past 24 hours to prepare hot meat or hot dairy is called a “ben yomo”. If it has not been used to prepare meat or dairy within the past 24 hours, it is an “aino ben yomo”. In cases of aino ben yomo, the halachos are typically more lenient than for a ben yomo.

USING AN OVEN FOR BOTH MEAT & DAIRY
If a pan with meat and a pan with dairy are covered, one may place both of them in an oven l’chatchila.4 This is true, provided that the pans do not touch each other and do not touch the “opposite” food (e.g., a meat pan may not rest on a rack with dairy residue).
If only one pan is covered and is on the lower shelf, it is also muttar l’chatchila. An uncovered meat pan that contains liquid may not be placed below a dairy pan in the oven (even if the top pan is covered).
It is prohibited for one to bake milk and meat products uncovered at the same time in an oven. B’dieved, if one erred and baked dairy food and a meat product in the oven at the same time (in different pans), the following halachos apply:

One should, l’chatchila, not bake an open liquid dairy item in a meat oven, even if the oven has no meat residue. B’dieved, if one baked an open liquid dairy item in a clean aino ben yomo oven after a liquid (or dry) meat item, the product is kosher. If the open liquid meat product had been heated in the oven within the previous 24 hours (ben yomo), and then an open liquid dairy product was heated in this oven, the keilim and oven may be non-kosher. A rav should be consulted.
“Clean” means there is no meat residue in the oven. If meat fell or gravy spilled and became charred enough, forming a black powdery substance (i.e., it can be pulverized by scratching it), or just left a stain, one may bake dry dairy in it (as previously indicated) as this substance no longer has the halachic status of meat. However, if there are pieces of meat or gravy that have not become charred, the oven is still considered fleishig and it is prohibited to bake uncovered dairy in it.
The ideal way to use an oven for both meat and dairy is to designate it as either meat or dairy. For example, if a family designates their oven for meat the following guidelines would apply:
Liquid or dry meat may be baked even if open, provided that the oven remains clean. May’ikker hadin, dry dairy items (even if open) may be baked in the oven after the open meat has been removed and the oven has cooled down. However, open liquid dairy items must be covered. Some advise to always cover the dairy item, even if it is dry.10 As previously indicated, the same halachos apply in a vice-versa case, (i.e., for a meat pan in a dairy oven).
One should not, l’chatchila, place meat directly (i.e., without a pan) on the oven racks or floor of the oven, unless it is used exclusively for meat; the same is true regarding dairy.

FISH AND MEAT ISSUES
One may not bake uncovered fish at the same time as uncovered meat or in a fleishig oven that is not clean. However, one may bake fish (even if uncovered, with or without liquid) in a clean meat oven or with covered meat. If one reheated uncovered challos in an oven at the same time as uncovered meat or chicken that has liquid (e.g. with gravy) then one may not, l’chatchila, eat the challos with fish. However, one may re-heat challos in the same oven as a meat dish that is “dry” (e.g. baked chicken without sauce) and then l’chatchila eat the challos with fish. One should be extra cautious on Erev Shabbos, when there is a rush before lighting candles, not to heat uncovered items that may not be heated together.

ADDITIONAL IMPORTANT OVEN HALACHOS
One may be mafrish challah and burn it in the oven, but the “challah” must be in foil and not touch the racks.12 In chutz la’aretz, the entire challah one is mafrish need not be fully wrapped.13 It is enough for the challah to rest on a piece of foil, partially wrapped underneath, to ensure it does not touch the rack. If the challah was burned while touching a rack, the rack needs to be kashered.14
If one wants to cook in a treif oven, the kosher food should be double wrapped. That is why kosher airline meals heated in treif ovens are double wrapped.
If one baked an open kosher liquid item in a clean treif oven that had been used within the past 24 hours, the product may be treif.15 However, if one baked an open dry kosher item in a clean oven that heated tarfus within the past 24 hours, b’dieved, the food is kosher. If one baked a dry or liquid item in a clean treif oven that has not been used at all16 within the past 24 hours, the food is, b’dieved, kosher.
If an oven becomes treif or if one wishes to kasher an oven from milchigs to fleishigs,17 or vice versa,18 it can be kashered by self-cleaning it or by cleaning it with EZ-Off and then heating it to 550o F (or broil) for 40 minutes.19 This method of kashering is called “libun kal”. When kashering an oven in this manner, it is not necessary to first wait 24 hours.20
The kitchen of a Yiddishe homemaker is regularly occupied with family members preparing numerous meals and dishes, as well as various delicacies l’kavod Shabbos and Yom Tov, and other special occasions. Knowing how to navigate from milk to meat, and vice versa, ensures that these savory dishes are – and remain – 100% kosher.