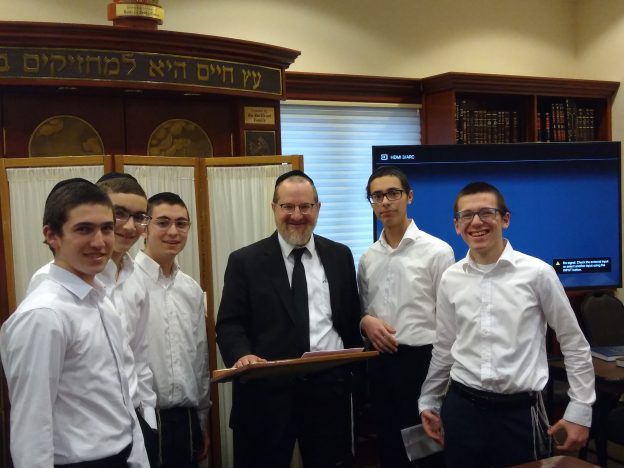 What better way to make kashrus and other halachic concepts come to life than to experience them hands-on? That is exactly what the bochurim of Mesivta Kesser Torah of Baltimore did when STAR-K Kashrus Administrators were invited to the yeshiva to present an array of topics.

The four-part STAR-K Educational Series kicked off in January with Rabbi Emanuel Goldfeiz’s Shatnez Lab practicum, in which the bochurim learned about modern-day shailos of shatnez. After the class, students expressed their excitement about the opportunity that they were afforded.  Students specifically were fascinated by the degree to which we go to avoid wearing shatnez. One student also remarked, “Knowing that VBC [Vitale Barberis Canonico] suits can be shatnez is very useful to know when suit shopping.”

The following week, Rabbi Sholom Tendler taught the students how to meticulously check vegetables for tolaim.  Students had a great time searching for bugs using the STAR-K’s thrip cloth method. The bochurim were astounded to learn about the prevalence of bugs in fruits and vegetables and how many lavin (Torah prohibitions) there are if they are consumed.

During Rabbi Zvi Goldberg’s Kashrus Q & A session the following week, many questions were fielded that taught the talmidim the importance of checking every package of food for a reliable hechsher.  Additionally, they learned what to do if you see a hechsher on a product that doesn’t look or seem right.

Lastly, in February, Rabbi Zvi Holland performed shechita on two chickens, enthralling the students with his ability to explain all the processes involved during his live demonstration; he even grilled one of the chickens for the bochurim to eat!

“Mesivta Kesser Torah values education for the bochurim that goes beyond the walls of the yeshiva,” shares General Studies Principal Rabbi Moshe Dovid Robinson. “We go the extra mile to find educational opportunities that are meaningful and add real-life issues in the Jewish world to their educational experience with the ultimate goal of becoming yeraim ushlaimim (well-rounded individuals). We thank STAR- K for allowing the bochurim to experience the important role that a kashrus agency has in a community.”

One bochur expressed his hakaras hatov for the Educational Series, in a letter:

Thank you so much for taking time out of your busy schedule to come to Mesivta Kesser Torah. We appreciate your teaching us about different halachos that many of us had never been exposed to in the past. It meant a lot to the bochurim in the yeshiva to have this experience.

Concludes STAR-K Kashrus Administrator Rabbi Zvi Goldberg, “All the STAR-K rabbis were happy to be able to teach this wonderful group of talmidim. It was done on Sundays, so technically it is a day off for the rabbis, but kashrus anyway can often be 24/7. It was great to see how much the students enjoyed learning about kosher.  I would bet there is a future Kashrus Administrator among them!”