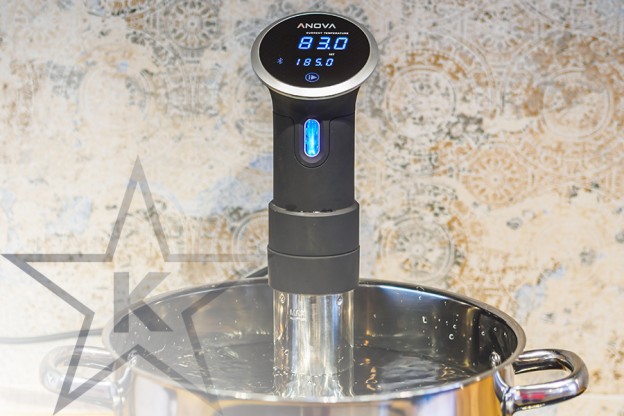 Some pronounce it ‘sue vee’, while others pronounce it ‘sue veed’. Either way, it is a French phrase which translates to “vacuum”. It is a method of cooking that was first described by the inventor Sir Benjamin Thompson, aka Count Rumford, who is also credited with the invention of thermal underwear. The techniques of modern sous-vide cooking were perfected in the 1970s and have become increasingly popular over the past twenty years. Sous-vide is a method of cooking in which food is vacuum-sealed in a plastic pouch and cooked in a bath of water at an accurately controlled temperature. The water is typically held at 125° – 175°F, which is considerably cooler than standard cooking temperatures in an oven. While the vacuum packing is achieved by removing any excess air, the food will not float but rather sink and be completely submerged underwater.

There are a number of benefits to sous-vide cooking. When preparing meat using conventional cooking, the food is subject to a level of heat far greater than the internal cooking temperature of meat. If the meat is removed too late, it will be overcooked; if it is removed too early, it will be underdone. Furthermore, the meat will not be cooked evenly. The outside will be more well done, and the inside will be rarer. Contrast that with sous-vide, in which the water is held constant at the desired internal cooking temperature. The meat cannot be overcooked, as it cannot get hotter than the temperature of the water in which it is submerged. Furthermore, the meat will be cooked evenly with the outside and inside being heated uniformly.

The fact that sous-vide food cannot be overcooked would seem to make it an ideal candidate for keeping food hot on Shabbos. However, there are two halachic issues with doing so – the prohibitions of shehiya and hatmana.

Shehiya: Chazal forbade leaving partially cooked food on an uncovered flame at the onset of Shabbos. This is due to the concern that a person may mistakenly stoke and increase the fire on Shabbos in order to speed up the cooking process. However, Chazal allowed this if the flame is covered because the covering will remind a person not to stoke the fire on Shabbos. The covering cannot serve as a reminder if it always covers the flame, only if it is placed on the flame specifically for Shabbos. Therefore, a heating element would be considered equivalent to an uncovered flame. Even though the element is manufactured surrounded by metal or plastic, these materials cannot be considered as a covering as they are always present.

The heating element of a sous-vide cooker heats the water which, in turn, heats the food being cooked for Shabbos. There is a debate among the poskim as to how to cover a heating element in order to mitigate the halachic issue of shehiya. Rav Ahron Kotler, zt”l, held that it is sufficient to cover the electronic controls of the heating element with foil. The foil will serve as a reminder not to tamper with the controls on Shabbos. This can be done easily with a sous-vide cooker. However, Rav Moshe Feinstein, zt”l, held that it is necessary to cover the actual area which gets hot. This can be accomplished on a regular stovetop by placing a blech over the fire; however, it may be difficult to do so on a sous-vide cooker.

One simple solution for Ashkenazim is to ensure that the food is fully cooked, or at least half cooked, before the onset of Shabbos. Once the food is half cooked, it is considered to be edible and there is no longer a concern that a person will feel the need to speed up the cooking process. At times of need, it is sufficient if the food is only one-third cooked. These times are measured as a fraction of the full cooking process. If it takes a piece of meat three hours to be fully cooked, it will be considered one-third cooked after one hour and half cooked after one and a half hours. Thus, when it comes to sous-vide cooking, Ashkenazim can avert the halachic issue of shehiya by ensuring that the food is half cooked before the onset of Shabbos. In such circumstances, care must be taken not to tamper with the food on Shabbos in a manner which would speed up the cooking process.
Hatmana: Chazal also forbade wrapping a pot of food on Shabbos to keep it warm. For example, one cannot wrap a hot pot in a towel on Shabbos in order to keep the food inside it warm. The Mishna Berura (258:2) forbids completely submerging a pot in hot water on Shabbos, as he considers this to be hatmana.

It is permitted to wrap the pot in a towel before the onset of Shabbos. However, if the food in the pot is being heated up on a heat source then it is forbidden to completely wrap it, even before the onset of Shabbos. For example, a plugged-in crockpot should not be completely wrapped in a towel before Shabbos. This is known as hatmana be’dovor ha’mosif hevel – wrapping in a manner that adds heat, which is forbidden even before Shabbos begins. According to the Mishna Berura, it would be forbidden to completely submerge a pot in water when Shabbos begins if the water is being heated up. That would also be considered hatmana be’dovor ha’mosif hevel. This is exactly what transpires in sous-vide cooking; the food is wrapped in plastic and submerged in water which is being heated.
It should follow that it is likewise forbidden to wrap kishka in foil and place it in cholent which is cooking in a crockpot before Shabbos. Here too, the kishka is wrapped and submerged in such a way that it is being heated up at the start of Shabbos. Some poskim do, in fact, forbid this. However, Rav Shlomo Zalman Auerbach, zt”l, and others permit this (Shemiras Shabbos Kehilchassa, mahadura chadasha chapter 1 footnote 254). They argue that the kishka is not wrapped to keep it warm, but rather to keep it separate from the cholent. As the intent is merely to keep the kishka from crumbling, it is not classified as hatmana. One could argue that the same is true regarding sous-vide cooking. The plastic pouch is intended merely to keep the food dry, not to retain heat.
However, the counterargument would be that the vacuum-packing and water bath are essential components of the sous-vide cooking process. It is necessary for the food to be dry for this method of heating to be effective; therefore, it would be considered hatmana. Rav Heinemann, shlit”a, paskens that leaving vacuum-packed food in a sous-vide hot water bath over Shabbos is considered hatmana be’dovor ha’mosif hevel.

One solution for Ashkenazim would be to make sure that the food is not completely submerged in water. Hatmana be’dovor ha’mosif hevel is forbidden for Ashkenazim when Shabbos begins only if the food is completely submerged. If some of the food sticks out of the water, it would be permitted. It needs to be recognizable that the food is not completely submerged, and it is not sufficient for a miniscule amount of food to stick out. While this may work halachically, it will defeat the goal of sous-vide cooking, which is to have all the food heated up equally. Therefore, practically speaking, sous-vide cookers on Shabbos will present a halachic problem of hatmana be’dovor ha’mosif hevel.
(I would like to mention the following articles that I found to be very helpful with the composition of this article: The article of Rav Yaakov Yosef Winkler published in Koveitz Eitz Chaim no. 31, and the article by  Rabbi Shmuel Lesches published in Young Yeshiva Magazine issue 14.)