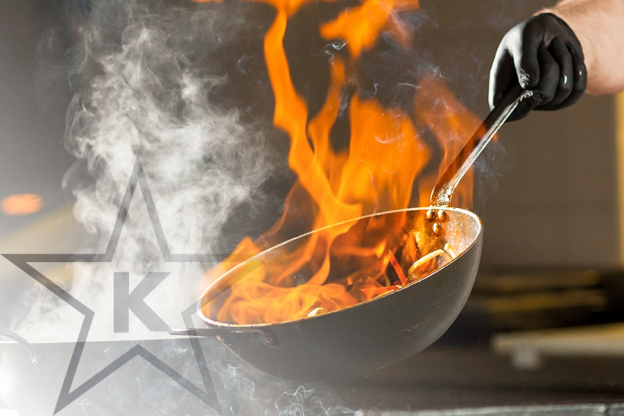 2 גדולה לגימה שמקרבת את הרחוקים there is nothing more effective to draw hearts closer (i.e., relationships) than a “geshmak” meal. לגימה is probably the most potent tool that kiruv professionals have in their kiruv arsenal. The “לגימה” factor is part and parcel of human nature and socialization. Unfortunately, we have seen how potentially dangerous “innocent” socialization can create serious pitfalls. As a precaution against unnecessary socialization, our חכמים3 have instructed that certain בושח foods served at important functions must be monitored by a יהודי in a small but significant way during the cooking preparation.

This significant participation of the יהודי in food preparation is known as בישול ישראל. בישול ישראל is required on foods that are considered to be עולה על שולחן מלכים, fit for a state dinner or wedding, and are not נאכל כמו שהוא חי , eaten raw. בישול ישראל is required for foods that are cooked,4 boiled, roasted, broiled, fried or grilled (i.e., fire is used as the cooking medium). Microwaving or induction cooking are not subject to בישול ישראל.5 Moreover, food that has been cooked by an אינו יהודי and has not reached מאכל בן דרוסי  (the 33% cooking threshold) can be finished by a יהודי and would qualify as בישול ישראל.

Practically speaking, when food is prepared by a kosher caterer, or in a facility such as a kosher certified nursing home or hospital, one of the main duties of the משגיחה /משגיח is to make sure he/she is the only one who turns on the fires. In the event that the facility or caterer/restaurant accommodates the Sephardi community who follow the psak of מרן בית יוסף, the משגיח must put the raw food in the oven (i.e., raw rice in the rice cooker or raw meat in the oven) while the fire is burning. Adjusting the flame is not enough.

In factory settings where בישול ישראל is required, and there is no משגיח תמידי , בישול ישראל can be a daunting challenge. Today, the obstacles are even greater. Thirty years ago, the pilot light which was used for gas burners and gas ovens was lit by the משגיח and the
בישול ישראל requirements continued to be met as long as the pilot light was not extinguished. As long as the pilot light beneath each burner remained lit, בישול ישראל was kept in perpetuity.
However, the technology culture has constantly moved to create energy-efficient appliances to save costs. Pilot lights gave way to electronic ignitions and electric sparking when the oven or burners were turned off; there was no light that continued to burn. How was the בישול ישראל issue to be resolved without pilot lights? One answer is by hotwiring an oven with a separate glow bar placed in the oven cavity. The electricity was turned on by the משגיח and the glow bar remained lit, even when the oven was turned off. A glow bar is a short electric element similar to the coil of an electric oven. The requisite בישול ישראל was fulfilled when the יהודי turned on the electricity to light the glow bar. As long as the glow bar remained lit, the oven was בישול ישראל-compliant. Not only is the “glow bar” a viable long-term בישול ישראל solution for ovens, it is also a good option for deep fryers that can be heated by a glow bar that would keep the oil warm and the fryer בישול ישראל-compliant.
How does a long-term בישול ישראל solution address steam jacketed kettles or rice cookers that cook with steam and water? The glow bar is not practical. The answer is the industrial boiler. It is the boiler that provides hot steam for the kettles. If it is lit by the משגיח, this qualifies for בישול ישראל.
For example, if the משגיח lit the boiler and the boiler constantly remains on throughout a two month sweet potato production, the entire production would be בישול ישראל-compliant. Of course, it is imperative that the company coordinate with the משגיח to make sure that the boiler remains lit. If at all possible, the boiler controls should be sealed. Lighting boilers has been an effective בישול ישראל system for decades.

However, in many companies even long-term workhorse boilers present בישול ישראל challenges. What was is no more. Energy savers have found their way to preserve the life of the workhorse boiler. In a quest for energy-saving techniques, boilers are typically turned on and off to conserve energy, thereby nullifying בישול ישראל. The following three examples are actual cases where STAR-K implemented בישול ישראל solutions to satisfy halacha as well as the company’s energy-saving plans.
Solution 1: לילה טוב Mode – A Pennsylvania company producing dehydrated potato flakes wanted to conserve energy by shutting down their boiler for the night and subsequent weekend, restarting for the next day’s production. In doing so, בישול ישראל would be nullified. The resolution to this issue was letting the boiler remain on a low temperature mode, keeping the water hot and בישול ישראל intact. This proved to be more energy-efficient because starting a boiler from a cold position requires more energy than simply turning up the boiler from low to high.

Solution 2: The Condensate Holding Tank – Recycling condensation is another economical water-saving technique that companies use to save on their water bill. Once the steam is used in a production, the condensation created is recaptured and sent back to the boiler to be recycled. This California Ready-to-Eat rice bowl company not only recycled their steam but turned off their boiler nightly, thus nullifying בישול ישראל. How were we going to solve this predicament?

Solution 3: Another Warming Belt to the Rescue – A different California-based Japanese company that produced rice vinegar, requiring the rice to be cooked (pre-fermentation), was also powered by a boiler that was turned off after production and turned back on again the next day. In this case, there was no holding tank to feed the boiler. The resolution was even more ingenious. This boiler system had a steam pipe which came off the boiler. The hot steam fed the cooking kettles through the pipe. By installing the warming belt that wrapped around the feed pipe and was turned on by the משגיח, the pipe was perpetually heated, and the rice was בישול ישראל-compliant to the satisfaction of STAR-K and the delight of the company.

As technology marches on and presents new challenges, frontline כשרות is right there to provide creative solutions to keep the consumer’s קדושה intact, and the companies happy.