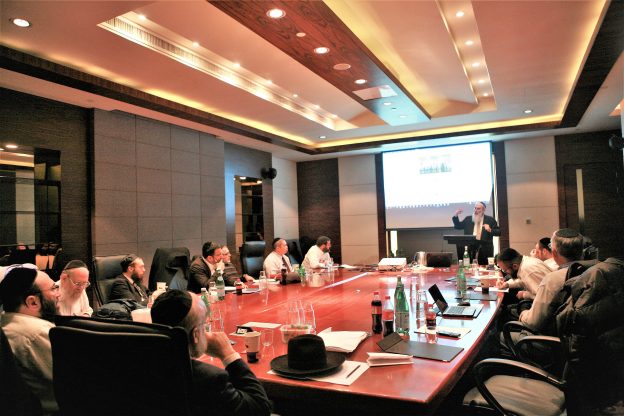 They come from Yerushalayim; Perth, Australia; Mumbai, India; Manila, Philippines; Boston; Scottsdale; and, Los Angeles; but truly, the mashgichim who attended the first-ever Pan-Asia Kosher Training Seminar held in Shanghai, January 9-14, live out of their suitcases. Dedicated to the mission of ensuring and spreading Kashrus, even at a moment’s notice, implies where they are from is wherever their luggage happens to be.

As the premier Kosher certifier in Asia, these STAR-K mashgichim are the “eyes and ears” out in the field who help certify thousands of products–as diverse as canned goods and nori sheets in China and South Korea, to spices and coconut products in India and Sri Lanka, to banana chips and coco sugar in the Philippines. Most of the certified products are exported from the region to the world as “bulk” ingredients that are processed around the word to make consumer products.

Among the several highlights of the Seminar were: a Shabbaton and Malaveh Malka shiur; an enlightening and heartwarming personal interaction via SKYPE with STAR-K Rabbinical Administrator HaRav Moshe Heinemann; and, an erev Shabbos interactive walking tour of Jewish Shanghai, where the participants learned about the immense effect that the open port of Shanghai had on Jewish migration in the WWII era and the astonishing Jewish life that existed in Shanghai during the war.

Among the many topics covered during the event were: Plant report development; Rabbinical prohibitions in kosher law; Insect removal from vegetables- process and methodology; and, the International Dateline and, also, time issues when davening while traveling. Mashgichim and STAR-K office personnel paired up to inspect factories.

One of the participants, who sent the following letter to STAR-K President Avrom Pollak, after the seminar, perhaps, best sums up the sentiments of everyone who joined:

“I wanted to take this opportunity to thank you for the wonderful Shabbaton I just experienced in Shanghai. As I go back into the field today it is with renewed energy after the inspiring few days that I spent in Shanghai with Rabbi Mushell, Rabbi Heber and all the incredible team of STAR-K Asia Pacific.

All the shiurim and events were informative and inspiring. The question and answer session the mashgichim had with Rabbi Mushell was an important opportunity for us in the field to discuss face-to- face with our Kashrus Administrator various things that come up in the factories.Rabbi Heber’s shiur on zmanim and the International Dateline helped me to gain a clear picture and practical guidelines in this complicated area of halacha that the traveling mashgiach encounters a lot.However, without a doubt the highlight, in my opinion, was the question and answer session we had Sunday morning Shanghai time with the Rav HaMachshir Rabbi Heinemann, shlit”a. It was a tremendous zechus to be able to ask various shailas to such an adom gadol. Rabbi Heinemann, shlit”a, answered all our shailas at length with tremendous insight and depth and even a little humor sprinkled in.