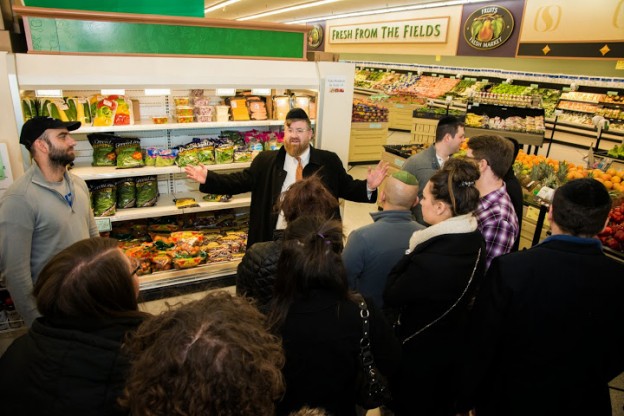 Baltimore, MD – Dec. 8 – This past Sunday a group visiting from Detroit had an opportunity to learn about the various response organizations that serve the Baltimore Jewish Community.

Approximately 30 visitors traveling to Baltimore with the Partners in Torah branch of Detroit came to Baltimore to see how our Orthodox Community is structured. After visiting Ner Israel and having a meeting with the Rosh Yeshiva, HaRav Aharon Feldman, shlita, they came to Bnos Yisroel to see firsthand the uniqueness of our chesed organizations.

Representatives of Hatzolah, Shomrim and Chaverim were on hand, explaining their histories and services provided. Dovid Heyman, Executive Director and Paramedic with Hatzalah of Baltimoreexplained the lifesaving emergency services they provide. Nathan Willner, General Counsel  and  Michael Diamond, dispatcher, of the Baltimore Shomrim Safety Patrol , and David Bagan, President of Chaverim also took turns explaining their organizations services as well. Many of the attendees asked detailed questions about the organizations and were very impressed by the dedication and professionalism of the services rendered to the community.

One story that was recounted by the representatives of the organizations, was when one rainy Motzaei Shabbos several years ago there was a multiple car accident on Northern Parkway, a Hatzalah member witnessed a serious collision where one victim’s leg was amputated as two vehicles collided. Immediately, multiple Hatzolah members raced to the scene to render aide, Shomrim provided security support assisting in holding tarps over the injured and assisting with traffic control, and Chaverim were able to alert traffic from entering the accident scene from streets leading into Northern Parkway.

All three organization, over 30 volunteers, spent hours assisting victims of the accident, that they had never met and were not members of the Jewish community. The victims’ injuries were completely treated and ready for transport before the 911 responders were even at the scene of the accident. The attendees were amazed and impressed with the synergy the organizations had with one another and how well each organization complemented the other in the close way they worked together.

The visitors were then able to see the Hatzolah ambulance and Chaverim Service Vehicle and were given a tour of the equipment the ambulance contained. It was with great pride that our community was able to showcase the chesed provided all by non-paid volunteers that respond to emergencies 24 hours a day, 7 days a week.

The group’s next and final stop of the Baltimore visit was to Seven Mile Market where they were treated to a tour by Rabbi Zvi Holland, Star-K Director of Special Projects. There, the group was able to have all their kashrus questions answered and  also gain insight on the concept and halachos of Shmita.