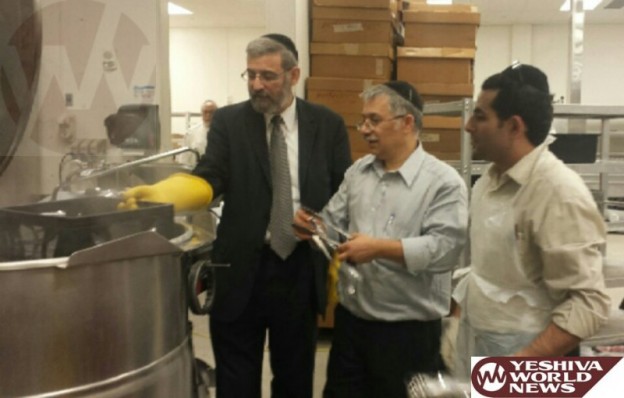 Security was tight at STAR-K Certification’s largest and most challenging food service supervision, to date–The Jewish Federations of North America’s 2014 General Assembly (GA), the premier annual North American Jewish communal event, held at the Gaylord National Resort & Convention Center, in National Harbor, Maryland, November 9-12. Vice President Joe Biden was one of the several scheduled speakers and I had to make sure I arrived early enough before Gaylord’s security lockdown. I never did get to see the Vice President, while I was touring the kosher kitchen with STAR-K Assistant Director of Supervision Rabbi Mayer Kurcfeld, who spearheaded the kashrus team for this event. But, I did feel the thrill of the anticipation of his arrival, as I went through more than one security checkpoint and watched a sniffing K-9 attack trained German shepherd police dog check out the crowd!

The Gaylord National Resort & Convention Center is a luxurious city in itself, with its 19 floors; 1,886 rooms; 110 suites; 89 meeting rooms; and 470,000 square feet of total meeting space. That is more than eight times the size of an American football field, or 10.8 acres. This was the facility’s first-time ever to host a kosher event and Rabbi Kurcfeld’s first-time ever to oversee such a gargantuan event in his 30+ years in kosher supervision.

Before any food could be prepared, half of the kitchen which Gaylord permitted to be partitioned off for the event, had to be kashered. By Friday afternoon, two days before the arrival of the 3000 expected GA convention participants, Rabbi Kurcfeld oversaw the 90% of the kashering which was completed. The remainder he did on motzei Shabbos. The list of things to be kashered included: a dishwasher, multiple ovens, a stove, hotboxes, two soup kettles, industrial-sized pots, a steam kettle, silverware, serving pieces, metal pitchers, and bread baskets.

Unlike the 2012 GA event, held in the Baltimore Convention Center–where the entire facility was kashered and participants and non-participants, alike, were served kosher–this event would be preparing for approximately 3000 participants who would be served Star-K certified kosher meals, while approximately 1500 non-participating Gaylord guests would be served treif at simultaneously held events and in six on-premises treif eateries.

To give you some idea of what was involved, Rabbi Dovid Lapin, Star-K’s Head Mashgiach and Kosher event planning specialist, put in 67 hours for the four day GA Convention. His longest stretch of consecutive hours was clocked in from midnight on motzei Shabbos until 11:30 p.m. on Sunday evening. In those 67 hours, he oversaw the supervision of, among other things, Sunday breakfast which was held in five separate locations, and Monday breakfast which was held in six separate locations. One of the six locations served 1100 of the 3000 conventioneers; another upscale one was served on china with silverware.

“On Monday evening, there were nine receptions held at one time, in one area of the convention center/hotel, while in another area, simultaneously, there were five other receptions taking place for 300 people,” related Rabbi Lapin. “More than 500 people attended one of the nine receptions; the other eight were attended by between 30-100 people.”

Veteran Star-K mashgicha, Emunah Friedman, clocked in 67-3/4 hours in the six days she worked. She was one of the 13 mashgichim posted at various food checkpoints in Gaylord, “manning” the area between the kitchen and the hallway adjacent to the loading dock. Describing the kosher kitchen scene prior to Vice President Biden’s arrival, she noted, “On Monday, the Secret Service shut down our production at 4 a.m. The kitchen staff had to report in by that time, although we were shut out of the kitchen until 6:30 a.m. We had to be down the hall from the kitchen, and the Secret Service kept changing our location throughout the process, constantly clearing the hallway. After they ensured that there was nothing dangerous for the vice president, with the help of a K-9 unit that checked every nook and cranny, we were able to return to the kitchen. By the time we were let back into the kitchen, at 6:30 a.m., it left the staff little time to prepare for breakfast, which was scheduled to start at 7 a.m.!”

What does it take to feed close to 3000 conventioneers for four days? “A lot of advance planning went into ensuring that an event this size would be a success,” explains Rabbi Kurcfeld. “I started planning and talking about the GA event more than a year before it happened. Our initial Gaylord-Star-K meeting took place before Pesach, on March 27. From then on, there were four in-person on-site and subsequent in-office meetings plus many communications via email, text messaging, and phone calls. I faced my biggest challenge in food service yet, with much trepidation. Somewhat like Eisenhower must have felt when planning “D-Day”, I thought of it as “GA-Day”. Boruch Hashem, in the end, all went as planned.”

Not having had the opportunity to see the vice president with my own eyes, I was curious to know if he partook of the Star-K certified food. My reliable sources tell me that he did not. Of course, with such impeccable kashrus standards as Star-K’s, no doubt, it had nothing to do with religion and, presumably, everything to do with politics—White House policy is strict when it comes to the president and vice-president eating out!