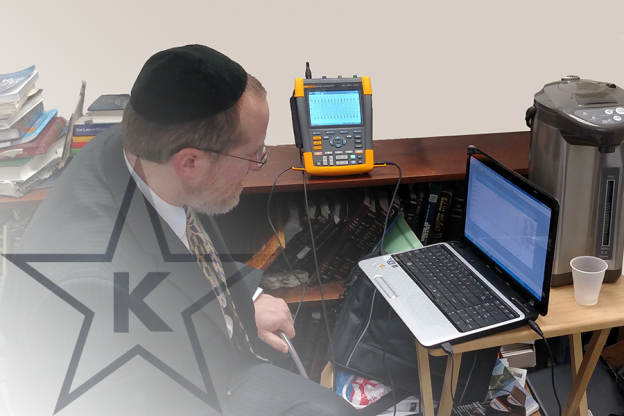 Electric urns greatly enhance our oneg Shabbos and Yom Tov by allowing us to effortlessly enjoy hot drinks. However, the technological advances that permit us to use urns on demand come along with a host of halachic considerations that must be carefully reviewed.

A summary of the various halachic considerations in the usage of electric urns, pump pots and commercial urns are addressed in this article. An urn is a heater that lets the water out through gravity using a lever at the bottom of the urn. A pump pot uses a pump at the top to force the water out. In this article, the term urn is used generically to refer to a pump pot, as well (except as noted in the section about the water level tube).

Keep in mind that there are many different types of devices, and not every situation is applicable to all of them.

Heating: It is best to bring the water in the urn to a complete boil before Shabbos.2
Adding: Adding water on Shabbos is always prohibited. On Yom Tov, it is permitted to add cold water provided no light goes on or off immediately upon adding the water, and the heating mechanism does not immediately turn on.3 Before Yom Tov, one can test to see how much water can be added before activating the urn. To test, follow the steps in the footnote.4

Dispensing: It goes without saying that dispensing water is permitted through mechanical means only (i.e., the use of spigots or levers). One should not press any electronic buttons.

Some urns feature a “Shabbos Mode”. On some models, this mode only disables the electronic buttons. For example, some models have a button which allows dispensing from a pump pot without having to manually ‘pump’. The “Shabbos Mode” disables that button. However, even without disabling that button, one could simply opt to use the manual pump.

“Yom Tov Mode” is a feature available on some urns and is obviously for Yom Tov use only. When this feature is engaged, the urn supposedly allows the user to refill the urn with cold water without activating any mechanisms. When STAR-K tested some models, we found that the mode only disabled the lights and buttons but not the reboil, which was activated as soon as cold water was added.

Sometimes, users want to cover the urn with a blanket or cloth to maintain the temperature of the water during Shabbos. Placing a covering that fully covers the urn is prohibited, even on erev Shabbos and certainly on Shabbos.6 If part of the urn is left uncovered, then it would be permitted– even on Shabbos itself.7 There are no restrictions on Yom Tov with respect to covering the unit.

On both Shabbos and Yom Tov, one should not dispense water from an urn if it is beneath the level of the spout (by tilting it). Doing so creates a halachic concern that one may be tempted to unplug the urn or add water to avoid damaging the urn.8 (Aside from halachic issues, removing the water is not advised since the element may overheat and should not be done, even on a weekday, unless the urn is first unplugged.)

Many urns include a tube of water on the outside of the tank that displays the level of the water inside the urn. When the urn fills up, the tube fills to the same level. When water is removed, some water from the tube flows out and is cooked by mixing with the water coming from the urn. There is concern that the water in the tube has not been cooked and, if so, removing water from the urn would be forbidden on Shabbos (but permitted on Yom Tov).9

Determining if the water in the tube has been heated is definitely a challenge. Some tubes feel very hot while others do not, especially at its top. The tubes generally do not allow easy access to thermometers or other temperature devices.

STAR-K consulted with engineers and undertook the testing of urns to see if the water moves from the tank into the tube, and the amount of time it would take to do so. Different models of urns were heated, then a food dye was poured into the urns.10 In all cases, the dye began flowing into the tube almost immediately. After a very short time, the tube was the same color as the water in the urn. This indicates that there is an exchange of hot water into the tube.11

Even if the water in the tube does not remain boiling hot (especially at the top of the tube), the Ramo12 holds that water which has once been heated and has not totally cooled down is no longer subject to restrictions upon further heating.

Based on this finding, Rav Moshe Heinemann, shlita, has paskened that one can use the urns without concern for the water in the tube.13

If one still wants to be strict about this issue, there are several options:

Large commercial urns with automatic refill were not tested and one should employ one of the above solutions. However, they often run at a high temperature. One can feel the tube at the bottom, and if one’s hand cannot be held there for 15 seconds then the water in the tube is being heated.14
A pump pot works differently than an urn. Dispensing water from a pump pot involves pushing down on a pump mechanism located at the top of the urn. Pressing this mechanism pushes the water up through the tube and out the top of the pot.

In the previously mentioned dye test, the dye was not transferred into the pump pot tube due to the different setup. Therefore, this poses a potential issue of bishul by mixing hot water in the pot with the water in the tube which may not have been sufficiently heated. However, with pump pots the solution is easy. After boiling the water before Shabbos, pump a few ounces of water out of the pot. This will push out the water from the tube, and the tube will then be filled with boiled water from the pump pot.15

Does Removing Water Cause the Urn to Activate?

This is another question we are asked regarding the use of urns on Shabbos. The argument made by some poskim is that the removal of hot water causes cold air to enter the urn, causing the urn to activate, which is prohibited.16

STAR-K tested various urns with a meter that measures total usage of power, as well as a Fluke brand tester17 that measures power usage per second and records the information.

None of our tests showed that the heating element was using more power or was activated sooner, although for technical reasons these tests could not be considered 100% conclusive.18 Since it is very difficult to ascertain, and one does not intend to cause an increase in power when removing water, halachically one is not obligated to be concerned about this on Shabbos. Therefore, one may dispense water from an urn on Shabbos without worrying that he is activating the urn by allowing cold air to enter.19

Commercial urns in shuls, yeshivos and hotels are often connected to piping and automatically refill when water is taken out. The urns generally have a water level sensor near the top of the inside of the urn.20 To allow use on Shabbos, shut off the water input and do one of the following:
Remove enough water from the urn before Shabbos to bring the water level below the sensor. Removing a few cups of water should be sufficient, but this should be tested on each urn.
Install a switch to bypass that sensor and activate it before Shabbos.

On Yom Tov, the urn may be used even if it refills. However, if there is a sensor then one of the above solutions is still required.

An “instant hot” device attaches to a sink and is connected to a small tank of water under the sink. The tank keeps the water at a high temperature and is refilled automatically through its connection to the water supply. The tank refills as the chamber empties and then boils the water as needed. Use of an instant hot device is always forbidden on Shabbos.

If the heating element is not activated immediately, one can remove water on Yom Tov. To determine permissibility on Yom Tov, we tested a popular model which holds 2/3 of a gallon. Our testing showed that one can assume the device is not immediately activated after removing one cup of water.21 After allowing sufficient time for the water to boil, one could take another cup.22 If the tank would be significantly smaller, it is possible that taking even one cup would be forbidden, and such a device should be tested before use.23

Due to advances in technology, there are more and more options that provide us with hot water on Shabbos and Yom Tov. Knowing the halachos allows us to enjoy our hot drinks in a permissible way.

The author would like to thank Mr. Jonah Ottensoser, STAR-K engineering consultant, for his assistance with this research.