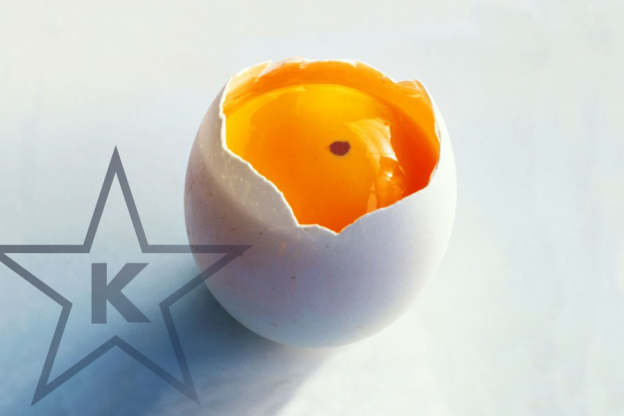 Jews have been eating eggs for thousands of years. How many of us have ever wondered whether the eggs we bought at the local grocer came from a Kosher bird? The Shulchan Aruch1 states that only eggs which are pointy on one side and round on the other side can be considered Kosher. If, however, both sides are round or both sides are pointy it would be a siman (an indication) of an עוף טמא, a non-Kosher bird.

The above noted siman does not make the egg itself Kosher, rather it is a way to indicate that the egg comes from a Kosher bird. Today, we can find chicken eggs which are round on both sides; consequently, the siman as stipulated by Chazal may have changed in our generation (נשתנה הטבע). However, it is considered an act of piety for one to verify that the egg one wishes to consume is, indeed, sharp on one side and dull on the other.

As most of us may know, every egg needs to be checked for blood spots before we eat it either by itself or as an ingredient in any food.2 Questions about eggs often arise, such as, “If one already fried eggs in a frying pan and then noticed a blood spot, does the frying pan need to be kashered?” or “If one cracked a raw egg and mixed it in with others, and then noticed a blood spot, does the entire mixture need to be thrown away?”

Since the time of the Gemara, there was a real concern that any blood spot that was found in an egg was blood created from fertilization. This would create a problem in that the entire egg would be considered an early stage chicken embryo, which would be forbidden for consumption.3

Today, fertilization occurs only in pastured eggs or eggs which were purchased from a small farm. This article will address blood spots found in conventional eggs.

Usually, when blood spots are found in a standard egg the blood itself is asur m’derabonon, forbidden by rabbinic ordinance, while the rest of the egg would be permitted.4 We are machmir (stringent) and discard the entire egg, even when there is no real concern of fertilization.5

Let us examine various scenarios when a blood spot is found in an egg. If the egg has not been combined into a mixture, the entire egg should be thrown out.6 However, if the egg was mixed with other eggs, one should try to remove the blood spotted egg as much as possible. Whatever part of the egg remains is not a concern and the rest of the mixture is permitted.7

If the blood spot was noticed after it was already fried in the frying pan, the egg should be discarded and the pot should be cleaned and not used for 24 hours. After 24 hours, the frying pan becomes an aino ben yomo and any imparted taam (taste) is pagum (distasteful); the frying pan would once again be permitted for use.8 This leniency is applicable only to blood spots in eggs. However, something non-Kosher which was cooked in a pot must be kashered, even after 24 hours.

Another leniency which applies to a standard egg involves an old minhag (custom) not to cook less than three eggs at one time. Only pastured eggs or eggs from a small farm are subject to this custom, not conventional eggs and one need not have a special pot designated for these eggs. However, many still have the custom to cook conventional eggs in a special egg pot.

We will now focus on another important halacha regarding eggs. The Gemara9 lists a number of things which put a person in danger, some of which include eating peeled onions, garlic or eggs which were left out overnight. It is interesting to note that this halacha is not brought down in the Shulchan Aruch, however, the Aruch HaShulchan,10 Shulchan Aruch Harav11 and other poskim do mention this concern. It is the minhag ha’olam (acceptable custom) to be careful in this regard.

There is a famous teshuva from Rav Moshe Feinstein, zt”l,12 regarding commercially used eggs that are normally cracked and left out for a few days. This is not included in the sakana (danger) which Chazal mention.

So, what should one do if he wants to make eggs on Thursday for Shabbos? Some poskim say that the Gemara was only referring to cracked open raw eggs, but cooked peeled eggs are fine to leave overnight.13 However, other poskim maintain that even peeled hard boiled eggs cannot be left overnight.14 The best option is to add something to the mashed eggs, such as mayonnaise, or a generous amount of salt.15 Once the additional ingredients have been added to the egg, any possible sakana has been averted. In a situation where one forgot and left eggs overnight, whether raw or cooked, a rav should be consulted.16