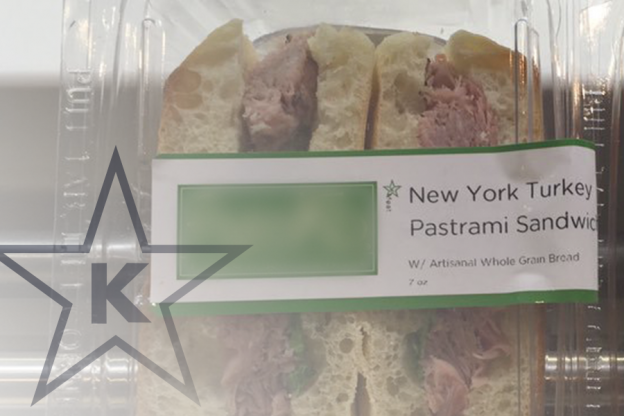 One of the popular services that STAR-K offers to worldwide Jewry is our availability to find answers to shailos on almost any topic. When a phone call comes in, our Kashrus Administrators often have little clue as to what they will need to address. Some answers end up being straightforward, some are complex and some need to be creative.

I was faced with the latter situation over a year ago when a woman called. She said that her husband’s company had brought him a ready-to-eat meal, “Grilled Cutlets and Salad”, in a plastic container from a kosher certified store. However, after it was presented to her husband, since no one had thought to request seals on the container, my phone rang.

“It’s not that important, but is there any way my husband would be allowed to eat this food?” the woman asked. Immediately, I emailed a colleague who asked me to send him a picture of the layout of the food in the container. He would show it to a frum worker, and if the worker would recognize the presentation, then the food would be permitted.1

Truthfully, not everyone would have known that there was a potential kashrus issue with the “Grilled Cutlets and Salad”. Furthermore, not everyone in a pressured work environment would have had the fortitude to forego his “kosher” lunch at a business meeting due to the slight chance of a real “switcharoo”. However, since much of our personal kedusha and the kedusha of Klal Yisroel is dependent upon maintaining our vigilance in kosher food consumption, it behooves us to learn about the obligation to maintain the kosher integrity of our foods when relinquishing our control to an aino Yehudi.

חבי”ת חמפ”ג 2 require chosmos. In laymans terms, this means that the rabbonim3 decreed that fish (without skin), meat, non-mevushal wine and techeiles that are deposited or sent with an aino Yehudi require two chosmos, two halachically approved seals. However, chiltis (a spice), fish oil dip, bread and cheese require only one chosam.

What is Our Concern?

If we limit our discussion to foods, when an aino Yehudi is in control of kosher food, what is of primary concern?

Our most pressing concern is for hachlafa, that the aino Yehudi might take the kosher food for his own benefit and replace it with a similar food item.4 The Shulchan Aruch makes it clear that we are not afraid that he is going to make this switch just to cause a Jew to do an aveirah.5
Thus, if there is no reasonable benefit that might accrue to the aino Yehudi, there is no reason to be concerned.

Rashi explains that one chosam is required for an inexpensive item. We would only have a minimal concern for hachlafa since an aino Yehudi can usually afford this type of food. It is almost not worth his time and effort to take the kosher food and replace it with the non-kosher equivalent.

An expensive item, on the other hand, is of greater concern. Perhaps the aino Yehudi cannot afford it. He might, therefore, take it for himself and replace it with its non-kosher cheaper counterpart.
The Rambam and the Rashba6 write that when there is a question of a Torah law being violated two seals are required. If the concern is the violation of a Rabbinic law, then one seal suffices.
The Ran explains in the name of the Yerushalmi that when our concern is the switching of an item, two chosmos are required. If the concern is the adulteration of something previously kosher, only one chosam is required.

The Rama7 says that we should follow the stringency of all of these rationales.

What Qualifies as a Chosam?

A valid chosam is a seal that requires significant effort to duplicate.8 However, by no means does the chosam need to be tamper-proof.

Common devices that can constitute bona fide chosamos are:

If the seal(s) are found to be broken upon delivery, or if the item is produced without any seals, the food can still be accepted as kosher if:

A) It is clear that the seals were broken inadvertently (e.g., shipping) and it is plausible that the aino Yehudi wasn’t aware of the broken seals.11

B) When the item bears a label confirming that the contents of the container at its origin were kosher, and no benefit is attained from the tampering.12

Example: There is no seal on a container of candy corn from a well-known kosher company.

Example: A bakery delivering hamburger buns to a shul whose door is locked leaves these items outside. There is no need to be concerned about a quick switch by a aino Yehudi. In this case, the aino Yehudi derives no benefit from taking and replacing these readily available and inexpensive buns.

C) It is clear that the food has not been tampered with by anyone.*

Example: Cartons are filled with ice cream when it is thick, creamy and soft. When the lid is placed on the carton, a very smooth and flat surface is created at the top of the ice cream and the lid. It would take great effort to replicate this smooth finish.

D) When the recipient is able to identify the food as coming from the kosher source through familiarity with the item.*

Example: The knish has a unique shape or always has grill marks on the bottom.13

E) Food placed in a public refrigerator in a bag or container that is clearly understood to be private property is permitted without any chosmos, as long as other people are coming and going at various times. In this case, there is a “mirseis” factor, a fear of being caught taking someone else’s food, that allows us to presume that no one will tamper with the food. However, if the food is left overnight or when no one is around, the food might be forbidden and a shaila should be asked.

On the other hand, if there is video surveillance of the refrigerator and the staff has been apprised of this, the food is permitted to be eaten.

*In such a case, food can be sent, even l’chatchila, without a chosam, provided that the recipient will notice its unique and defining feature.

In 1982, seals weren’t commonly used for safety and quality control purposes. That year, seven people in Chicago were murdered after somebody tampered with Tylenol capsules. Investigations revealed that somebody had removed Tylenol from store shelves. He or she opened the bottles and capsules, filled the capsules with potassium cyanide, and returned the bottles to the store shelves. Consumers then bought the tampered bottles, unknowingly ingested the Tylenol, and consequently died from poisoning. Tylenol’s parent company, Johnson & Johnson, quickly recalled all Tylenol products and prevented more deaths. Today, this case still remains unsolved.14

Subsequently, food and pharmaceutical manufacturers began to develop a variety of seals that would protect the safety of their products.

In a similar way, some 2,000 years ago Chazal formalized the halachos of chosmos to secure our food in order to deter tampering and to protect the integrity of kosher food.

As the Or HaChaim Hakodosh explains, “V’hiskadishtem” – Hashem guarantees that if we make fences so that we don’t become tamei, then – “V’h’yisem kedoshim” – I promise that you will be kedoshim.”

Our kedusha as the am hanivchar depends on our zehirus in these halachos.