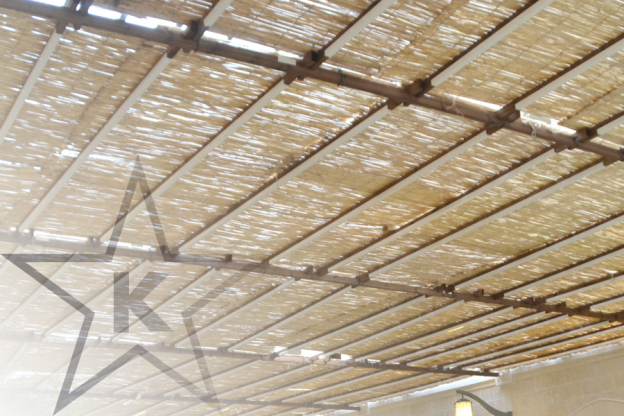 When our הרות speaks about the Festival of סוכות it states,חג הסוכות תעשה לך באספך מגרנך ומיקבך”,1″ “The סוכות holiday should be observed at the time that you harvest your grain and your wine,” during the fall.  Our חכמים have taught us that this קוספ has another interpretation.  The סוכה, in which we dwell during this חג , should be made from the unused parts of the harvested grain and wine, namely the stalks of grain and twigs of the vine.  These are the items that should be used for the סכך, the covering, which is placed on top of the סוכה instead of a permanent roof.

Our rabbis have further taught that this directive, פסולת גורן ויקב, includes other items that are similar to stalks and twigs that are no longer attached to the ground and cannot become ritually impure, טמא.  Unfinished wood slats, corn stalks, and palm branches are popular varieties that satisfy the criteria for סכך.

Many natural materials are not qualified to be used for סכך.  Leather is a natural product that does not grow from the ground; neither do cement or natural materials such as metal, none of which may be used for סכך.  All types of foods are not kosher material for סכך.  Included in this הלכה are grain husks that have some grains remaining in the husks.  Wood products that are cut and shaped into vessels, utensils or equipment that is tubular would not qualify as סכך because these products can become טמא. Even if the wood vessels were to be broken and unfit for their original use, and can no longer become טמא, they remain disqualified.

Although hollow, bent wooden pipes would not be kosher for סכך, hollow bamboo poles would be kosher because they grow hollow naturally and were not fashioned by anyone with the intention of putting things into their opening.  Straight wooden pipes without indentations would be kosher, as would wooden beams, even those with imperfections in the wood.  However, the custom is not to use them.

Stems that are used for סכך must be in their original state and cannot be subject to further processing.  Even items which cannot become טמא are פסול מדרבנן if they have been processed and their appearance has changed. For example, flax stems are kosher but flax rope is not.  Cotton wool, which has been combed out and no longer resembles the natural cotton plant, would no longer qualify as סכך.

Flax rope is problematic for another reason.  According to רש”י, if the linen fibers were twisted into threads and braided into rope they are פסול מן התורה.  The תורה disqualifies them, as well as any other woven material.2

Branches of a tree cannot be used for סכך if the branches are still connected to their original source.  If the branch was still connected to the tree while covering the סוכה and was then cut down, the branch would be disqualified. This is so, unless a person lifted the branch and then replaced it on the סוכה with the intention of using the branch for סכך.  Our rabbis have taught that סכך which has an unpleasant odor should preferably not be used.  Kosher סכך has to remain fresh throughout the entire חג. Branches with leaves that will dry out during סוכות, or vines that will shrivel, are disqualified and are not kosher even while the leaves are still fresh.

How wide can the boards be in order to qualify as kosher סכך?  One may use boards that are less than 4 תפחים (x14”) wide.  Even if wider boards would be set on their sides, these boards would not be kosher.  It is the custom not to even use narrower finished wood planks generally used in construction.

As was previously stated, the criteria for סכך is threefold:  1) items that grow from the ground, 2) items that are no longer attached to the ground, and 3) items that cannot become טמא. Reeds, straw, or wooden slats that are woven into mats would not qualify as סכך if they were woven for the purpose of sitting or sleeping upon, or any other specific function.  However, if they were made expressly for סכך these mats would be kosher.

A kosher monofilament mat must be placed on the סוכה in the proper manner.  The following guidelines must be followed:  The bamboo slats should be placed perpendicular to the beams and walls upon which they rest in such a way that the slats would remain supported by the beams and walls, even if the monofilament line were to be removed.  In other words, if the monofilament line (which does not qualify as סכך) is supporting the slats, the mat has been placed down improperly; one may not suspend סכך with non-סכך material.  Furthermore, סכך mats must not be anchored with string to prevent the mat from blowing away in a normal wind (a רוח מצויה). Instead, a kosher wooden beam may be placed across the mat in order to hold it down. A wooden beam placed on top of a monofilament mat should be positioned perpendicular to the slats. There are סכך mats available consisting of slats that are lined with natural fibers that are considered kosher for סכך. With this type of mat it is not necessary to ensure that the slats are placed perpendicular to the beams and walls.
Can kosher mats contain more than 25 slats, or would the mat be considered a bundle (חבילה)? Since the mat does not need to be dried, it may contain more than 25 slats without qualifying as a bundle.

There is a שאלה as to whether one can support the סכך with something that is not kosher for use as סכך.  Therefore, one should not support the סכך with anything that can become טמא, i.e. metal rods or pipes.  Also, one cannot use metal to weigh down the סכך so that it will not blow off with an ordinary wind.  One may, however, hold down the support with something that is not kosher for use as סכך.  If the סכך is supported by wooden beams, which are used to strengthen the סכך to prevent it from blowing away in an unusual wind, then nails or string may be used as a support to the beams, as long as the support is not part of the סכך.

How much סכך should be used to cover the סוכה?  The amount required is determined by the amount necessary to shade the סוכה.  The סכך must be dense enough so that there should not be more sunlight than shade.  However, it cannot be so dense that the rain would not be able to fall into the סוכה.

We have mentioned just some of the דינים of סכך. There are many more הלכות; however, this article does not allow for a more elaborate discussion.  In case of questions, a halachic authority should be consulted.

הקב”ה should help us to properly fulfill the מצוה of סוכה so that we may merit to see with our own eyes His tabernacle of peace spread over the entire Jewish nation and ירושלים.