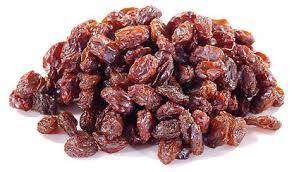 The Torah extols Eretz Yisroel as the land blessed with seven types of produce:  wheat, barley, figs, grapes, pomegranates, olives and dates (D’varim 8:8).  Most types of fruit are harvested once a year.  Since fresh fruit spoils quickly, the challenge has been to find a way to enjoy them year round.  Modern processing methods, such as canning and freezing, allow for  a form of preservation similar to that of fresh fruit.  Older methods, however, involved processing the fruit into a new product markedly different from the original, but with equally tasty and desirable traits.  Dried grapes – raisins – are a case in point. Grapes are harvested in the fall within a span of about six weeks.  Some of the crop is eaten as fresh fruit, and much is squeezed to make wine.  From the times of Tanach, however, grapes were preserved by drying them in the sun to form raisins, which could be stored for long periods of time.  Raisins were a concentrated source of nutrition and tasted great. They have been consumed by Jews for thousands of years.  In fact, one of the rations used by Dovid haMelech’s army was raisins.  While the lowly raisin has enjoyed a long history, it has also been the source of much halachic discussion.

Traditionally, grapes were dried by spreading them out on mats and placing them in the sun; today, this remains the most common method of drying them. Since the raisins lie in an unprotected environment, there is a concern of insect contamination.  Indeed, the question of insects in raisins became a major point of discussion about six months ago, with some Poskim recommending that raisins not be eaten at all. This halachic issue, however, is not new.   The TaZ (Y.D. 84 s.k. 12) specifically discusses the halachic status of raisins and concludes that they are permitted, based on a S’fek S’feka: (1) It is not clear that the raisins contain insects, and       (2) Even if they did, perhaps the insects hatched after the grapes had been harvested (which would classify them as lo pirshu – they had not traveled on ground – and would thus be permitted).  Although the Mishkenos Yaakov may have disagreed with the TaZ, there seem to be additional reasons to be lenient in our case.   Most importantly, the insect that is most often found in raisins is called drosophila.  It typically appears only after the grape has been harvested, thus strengthening the argument that raisins containing this insect would be permitted.  As such, most hashgacha agencies have concluded that raisins handled in accordance with acceptable manufacturing standards pose no halachic concern of insect infestation.

However, kashrus concerns regarding raisins do not end with possible insect infestation.  We all know how sticky raisins can be, and usually consider this one of its endearing characteristics.  In mass production, however, clumped raisins pose a major handling problem.  Trying to get just the right number of raisins into a box of Raisin Bran would be almost impossible if they all stuck together.  Manufacturers have resolved this issue by coating raisins with oils and/or glycerin, allowing them to be mixed and handled like any other particulate matter.  From a kashrus perspective, however, these two ingredients can adversely affect the inherently kosher status of the raisin.  Glycerin is derived from fat, and even vegetable oil can pose major kashrus concerns. While raisins sold for retail use are not coated with oils or other chemicals, often those used in the baking industry and other food processing applications are treated and would require a reliable kosher certification.

The use of oils in the production of raisins, however, is much more ancient than the production of Raisin Bran.  As grapes grow on the vine, they resist losing moisture by producing a waxy coating on their skin, known as the “cuticle.”  While this defense against desiccation (drying out) may be useful to the fresh grape, it inhibits the drying process necessary for raisin production. Eventually, people realized that if they could modify this waxy layer, grapes would dry more quickly. One way of solving this problem is to dip grapes in a hot caustic soda solution before dehydration. This causes fine cracks to form on the skin of the grape, allowing moisture to escape more quickly. While this process poses no kashrus concerns, the raisins become sticky because the sugary juices escape through the cracked skin.  Another solution is to modify the cuticle to increase its permeability.  For thousands of years, farmers would dip grapes into a mixture of olive oil, wood ashes (caustic soda), and water – essentially a form of soap! The mixture would weaken the wax in the cuticle and allow moisture to pass through it more easily, thus hastening the drying process.

More recently, however, scientists have developed treatments called “grape dipping oil,” which involves water, fatty esters, and a caustic agent.  These products not only hasten the drying process, but also tend to prevent the browning of light colored grapes.  This produces a “golden raisin” without the use of bleaching compounds, such as sulfur dioxide.  Since golden raisins are more prone to this process, some authorities are worried that these raisins treated with fatty esters pose a kashrus concern.  As such, many hashgacha agencies now require a reliable kosher certification for golden raisins, as well as imported raisins of all types.  Others, however, feel this is unnecessary since the fatty esters in question are invariably derived from vegetable sources, and the caustic agent used in the production of the dipping would render the product inedible.

Raisins play a role in the life of the Jew on a weekly basis, in the form of Friday night Kiddush.  The production of kosher wine poses many difficulties, given the seasonal availability of grapes and the halachic stringencies involved in their processing.  Nowadays, we do have ready access to an abundance of kosher wine.  This was not always the case in past generations, especially in colder climates where grapes did not grow and kosher wine was expensive and hard to find.  The common solution to this problem was “raisin wine.”   This was made by grinding dried raisins, mixing them with water (allowing the grapes to rehydrate), and fermenting the reconstituted grape juice.  The Shulchan Aruch (O.C. 272:6) rules that raisin wine has the same halachic status as wine made from fresh grapes.  Indeed, raisin wine was often the only option available to Jews in Europe. [Much halachic discussion takes place, however, regarding the exact qualifications of raisin wine.  For example, the Tur rules that if the raisins are completely dried out, then the process of rehydration would still disqualify them.  Also, the ratio of water to the raisins cannot exceed one to six.  Given these and other halachic complexities, the Be’ur Halacha recommends that one use regular wine if at all possible.]

The ability to consider raisin wine the equivalent of regular wine, however, has its halachic downside.  Raisin “juice” is often used as an ingredient in baked products, especially bread.  This is because it is an all natural source of color and sweetness, aids in maintaining moisture, and is a mild natural preservative. Given the fact that juice derived from soaked raisins has the halachic status of grape juice, however, it is subject to all of the rules of S’tam Yaynam.   As such, it cannot be produced or handled by non-Jews until it has been cooked (m’vushal), just as any other kosher wine or grape juice. Given the common use of raisin juice in the manufacture of food products, this issue has raised significant concern.  One solution, adopted by Rav Elyashiv shlit”a, is to cook the raisins before processing them into juice; thus, any juice that is subsequently expressed from them maintains a status of m’vushal.  Some kashrus organizations do not agree with this approach and require that the juice itself be cooked before it can be considered m’vushal.

Given the concerns of raisin wine and raisin juice, one might think that the simplest way to halachically enjoy a raisin is just to eat it without any processing whatsoever.  Unfortunately, things are not so simple, especially if one is not very hungry. Indeed, it is preferable that one never eat a single raisin at all!  The reason is as follows:  When eating a single raisin, one must certainly pronounce a B’racha Rishona (Ha’Etz), but as far as the Bracha Acharona after eating a single raisin is concerned, things are not so simple.  Generally, one is not required (or even permitted) to make a B’racha Acharona until one consumes a k’zayis (the size of an olive) of any given food.  While Poskim dispute the exact size of an “olive,” everyone will agree that a single raisin does not qualify; therefore, it would seem that one would not recite a B’racha Acharona.The problem is that a single raisin is considered a Berya – a “complete” item – and there is a dispute amongst the Poskim as to whether eating a Berya is equivalent to eating a k’zayis. The Shulchan Aruch (O.C. 210:1) rules that one should avoid eating a “whole” fruit that is less than a k’zayis in order to avoid a B’racha L’Vatala (wasted bracha).  When eating raisins, therefore, it is recommended that one eat several – or none at all – which gives a whole new meaning to the phrase, “Bet you can’t eat just one.”

As previously mentioned, sun-dried raisins have been around for thousands of years, as have the kashrus concerns they may pose.  Raisins are, therefore, uniquely positioned to exemplify Shlomo haMelech’s admonition, “V’Ayn kol chadash tachas ha’shamesh” – “…And there is nothing new under the sun.” (Koheles 1:9).