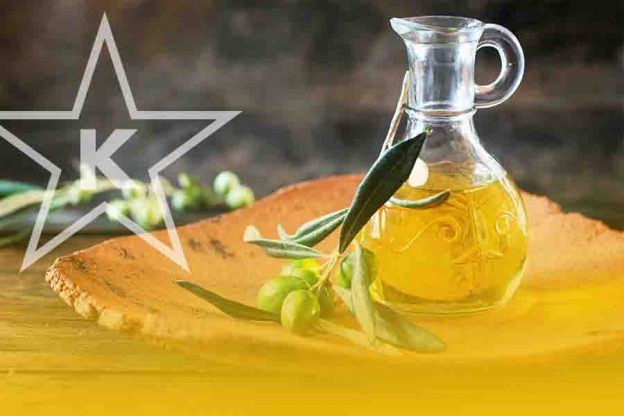 Olive oil – the liquid gold of the ancients – was touted for its nutritional, medicinal, and cosmetic value. As a fuel, olive oil illuminated the home; as a food ingredient, it was a feast to the palate. Olive oil production is one of the world’s oldest industries which has not changed much over the millennia.
Numerous olive oil brochures of the Mediterranean coastal region proudly claim that the olive oil industry dates back to over 5,000 years. This is demonstrated by the discovery of a 5,000 year old olive oil earthenware vessel in Turkey. Shemen zayis, as mentioned in the Torah, is one of the seven special species of Eretz Yisroel. The Torah requires the purest of pure olive oil, shemen zayis zach, to light the Menorah. Olive oil was an integral part of the service in the Bais Hamikdash. The olive branch is considered a symbol of peace and was also brought back to Noah’s ark by the dove, signaling that the end of their year-long confinement during the flood was in sight.
Today, olive oil’s popularity has dramatically increased and has taken the health conscious market by storm. Premium quality olive oil under reliable kosher certification is imported from Crete, Greece, Italy, Morocco, Spain, Turkey, Tunisia, and Australia as well as Chile, California (U.S.), Argentina and, of course, Israel.
What is the difference between the processing of olive oil and other vegetable oils? What exactly is extra virgin olive oil? Are there additional kashrus concerns? Let us take a closer look at this industry of antiquity.

The Cold Pressing Miracle
Olive oil is truly one of Hashem’s unique creations since it is the only fruit oil that can be extracted through cold pressing. This means that the oil need only be squeezed out; no further refining is required, as it is ready for consumption. Although the heavy grindstones and millstones that crushed and expressed the olive oil in ancient times have given way to mechanical crushers and centrifuges, cold pressing extraction has remained virtually unchanged. The olive oil’s quality is rated by its acidity content. If there is little free acidity content, this supreme quality olive oil is labeled extra extra virgin; up to 0.8% acidity, the oil is considered extra virgin; from 0.8 to 2% acidity is virgin olive oil. These naturally squeezed oils are robust, flavorful and full- bodied. The oil is filtered through a cold filter press and is ready to go.
In the event that the acidity level of the cold pressed olive oil is too high or other quality parameters do not fall within the specification for the category (including the presence of organoleptic defects), the oil would not be considered acceptable for consumption. Consequently, it would be necessary to refine this oil in a similar manner as other crude vegetable and seed oils.

Refining Oil
Four basic steps are used to refine oil: Neutralization, Separation, Bleaching and Deodorizing.
Neutralization and Separation: When an oil is neutralized, sodium hydroxide (also known as caustic soda) is added to lower the acidity level. This neutralizes the acidity of the crude oil by combining with the oil to create a sodium salt, which is then filtered out from the oil and used for soap stock. The neutralized oil is then ready for bleaching.
Bleaching: Diatomaceous earth is added to bleach to absorb the dark colored particles of the oil, in order to give it a clear color.
Deodorization: Any unusual smell is then eliminated through a process known as deodorization. The oil is heated to very high temperatures in a 12 meter tall deodorizer. A vacuum and high heat remove any smell. The result is a clear, odorless, refined vegetable oil.
In the event that a refinery processes only vegetable oil, the kashrus issues regarding equipment are minimal. In the past, it was customary for many of the oil refineries in the U.S. to refine tallow and rendered beef fat or lard, as well as vegetable oil, on the same equipment. Cleaning and kasherizing a 12 meter high deodorizer that has been deodorizing tallow is nearly impossible. Just ask any housewife who has to clean a greasy, oily, caked-on frying pan and then multiply it by 12 meters! Consequently, many reliable kashrus agencies would not kosher certify vegetable oil that was deodorized on a common animal/vegetable deodorizer. Although animal/vegetable refineries have greatly diminished in the past 20 years, they still exist and the kashrus issues in an animal/vegetable plant are still critical. Due to these issues, any refined vegetable oil or product containing vegetable oil requires reliable kosher certification.1

Kosher Oil Transport
The Talmud relates2 that when Daniel was in the court of Nevuchadnezer, King of Babylon, he refrained from eating unsupervised olive oil because he suspected that the oil may have been adulterated or contaminated. Furthermore, Daniel suspected that the vessels that held the oil could have been smeared with non-kosher fats or oils. The Talmud questions whether or not the rabbis should permit unsupervised olive oil. This was subject to many opinions. The Talmud concludes that Rabbi Yehuda Nasia and his rabbinical court permitted this oil. According to halacha, there is no rabbinical prohibition of shemen akum.
Is there a real concern for olive oil adulteration today? Given that extra virgin olive oil is such a high end commodity, adulteration is very inviting and very troubling. Quality control standards stipulate that each production of extra virgin olive oil must undergo a battery of quality control testing to assure its integrity. It was assumed that with the producer’s reputation on the line, olive oil adulteration would be almost impossible. Over the years, however, there have been allegations regarding the compromise of olive oil in various oil facilities, especially with the proliferation of many food service brands. In fact, a U.S. congressional committee is proposing that the FDA begin testing olive oil imports and olive oil from supermarket shelves.
The North American Olive Oil Association (NAOOA) was created to work on behalf of the olive oil industry on legislative and regulatory issues to promote and educate consumers about the value and benefits of olive oil. It also serves as a voice of integrity in an industry that has been subjected to alleged improprieties. Furthermore, the NAOOA has repeatedly voiced these concerns to the international olive oil parent body, the International Olive Oil Council (the IOC), without any satisfactory resolve.
Finally, the NAOOA decided to take matters into its own hands by implementing an olive oil seal program, similar to an olive oil kosher certification, in order to create a U.S. standard of identity for olive oil. Companies that agree to participate in the seal program must pay an annual fee and submit samples for periodic testing. The intention of the seal program is to discourage would-be olive oil adulterers. However, companies must be willing to participate. Moreover, food service consumers such as restaurants and hotels are more concerned with the bottom line price rather than aesthetics and quality; consequently, the seal program is a hard sell. In fact, the company that spearheaded the USDA Quality Monitored seal program and regularly opens itself to product testing is one of STAR-K’s premier Baltimore-based companies, Pompeian Olive Oil Co.
Consequently, STAR-K requires kosher certification on all types of olive oil, including extra virgin. There is a contractual agreement between the manufacturer and the kashrus organizations, as well as an extra set of eyes that inspect the facilities. Unfortunately, allegations refuse to go away.
One of the alleged “counterfeit” oils that has been known to pass as a genuine olive oil when blended together with olive oil, and possibly squeaks by certain purity parameters including the Delta-7 stigmastenol content for olive oil adulteration, is hazelnut oil. However, due to the fact that the overwhelming majority of oils are unregulated, products labeled as “olive oil” can be mixed with seed oils and go undetected! The outcry for government regulation indicates a real problem. Nevertheless, the kosher consumer should be informed regarding the allegations and responsive action taken by the NAOOA in implementing the seal program. Any olive oil, cold pressed or refined, should be purchased with reliable kosher certification. Furthermore, it is comforting for the kosher consumer to note that olive oil producing countries do not refine any animal fats in their oil refineries.
The issues concerning the transport of kosher vegetable oils from global ports is as real today as it was in Nevuchadnezer’s court. Wooden casks, clay jugs and leather flasks have been replaced with 55 gallon drums, five gallon tins and plastic bottles. New drums and packaging solve the concerns of retail packaging. However, the new reality of reusable plastic flex tankers and the age-old issue of common carrier transport in trucks and ocean vessels is a real kashrus issue. The problem with shipping kosher oil in a common shipping vessel is further exacerbated, due to possible contamination of kosher oil from non-kosher wine vinegar and/or animal based fats, as well as chemicals shipped in adjoining shipping compartments.
Kosher truck transport has been a front burner issue, as well. Trucking companies sensitive to the kashrus concerns of kosher certification agencies have set aside dedicated carriers or kosherization protocol for common carriers. The problem of common shipping carriers has been solved by establishing criteria for kosher food transport in shipping vessels with the cooperation of tanker transport companies. The kosher criteria are as follows: The last three shipments prior to the transporting of kosher certified product have to be kosher grade products. During the transport of the kosher certified product, no non-kosher product can be shipped in adjoining compartments of the vessel. Although tallow production is uncommon in olive oil producing countries, tallow-based shipments of products such as glycerin from foreign countries are not uncommon. Therefore, oil refineries still require kosher certification.

Pesach, Seed Oils and Enzymes
As previously noted, seed oils such as corn and soybean which are not used for Pesach are commonly refined in the same facility that produces extra virgin olive oil. The holding tanks for extra virgin olive oil are always separated from the seed oils. At times, there could be a commingling of common filters, fillers, and hoses. While not a widespread practice, enzymes may have been used to help extract more oil during olive processing/pressing. The enzyme used requires reliable kosher certification, and while not certified for Pesach, those com monly used in the industry are kosher year-round. In light of the contemporary kashrus issues surrounding extra virgin olive oil, this type of oil requires reliable kosher certification.
Zayis ra’anan yafeh pri to’ar kara Hashem shimecha.3 Hashem compares the nation of Israel to the beautiful fruit of an olive tree. The Midrash questions why Israel is likened to an olive tree. Don’t other beautiful trees or fruits merit this comparison? Why not the delicious grape or the tall majestic cedar? The olive tree is strong, durable and can endure for centuries. The main benefit of the olive is its delicious oil, which is not easily obtained. First, the tree needs to be shaken to loosen the olives. The olives must be crushed, ground and pressed under the weight of heavy mill stones. Finally, the precious oil is extracted. So, too, the nation of Israel is constantly subjected to the pressures and criticism of a hostile world. It is under these challenges that our great strength, fortitude, and resilience exude from within our national collective self and our achdus, unity, comes to the fore. Just like the olive, to which the Torah attributes special significance, Bnei Yisroel truly rises to the occasion to weather the various challenges that come its way.