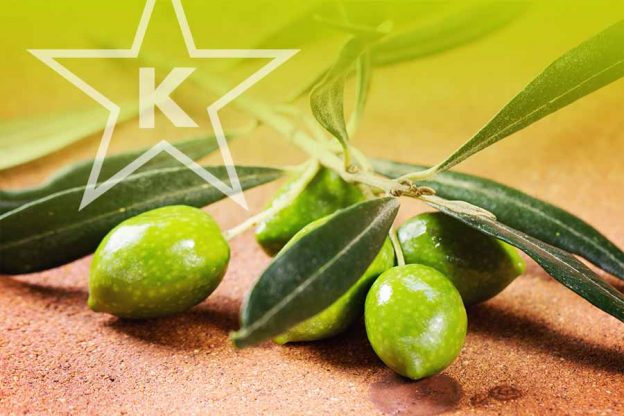 If one had to choose a single word to describe an olive, it would be ‘versatile’. Olive oil was used daily to light the Menorah in the Bais Hamikdosh. Our first introduction to olive oil was the Shemen Hamishcha, an infused olive oil with a unique blend of spices used to anoint melachim, kohanim and klei haMikdash. Moreover, the yonah (dove) brought back an olive branch to Noach in the ark, and our baseline halachic measurement for eating something significant is a “k’zayis”, the size of an olive.1 The Gemara in Brochos tells us that if one sees an olive in a dream, it is a sign of peace; if one sees an olive branch, it is a sign of Torah scholarship.
There is an opinion in the Midrash that the fruit of the Eitz Hadaas, Tree of Knowledge, was from an olive tree. Additionally, Asher (one of Yaakov Avinu’s sons) inherited a portion of Eretz Yisroel that was blessed with an abundance of olive oil and was steeped in beauty and radiance. Furthermore, olives- זית שמן  – are one of the shiva minim, seven species, that personifies the uniqueness of Eretz Yisroel. Can any one fruit tree boast such diversification?
Today, the olive oil industry has grown exponentially and table olives have taken a more prominent place on the health conscious condiment platter. STAR-K went to the ancient epicenter of table olives – Greece – to research the table olive industry and the kashrus concerns involved. Let’s begin.

THE ORIGIN OF OLIVES
It seems that the olive tree had its beginnings in the cradle of civilization, the region corresponding to ancient Persia and Mesopotamia. The olive plant later spread from these countries to nearby territories corresponding to present day Syria, Lebanon, and beyond. The olive was one of the mainstays that co-existed with our cuisine for thousands of years. Cookbook historians have posited that the most ancient evidence of olive cultivation is found in Syria, Israel and Crete; olives were grown commercially in ancient Crete. Furthermore, it is quite possible that olives were the source of wealth of the Minoan civilization.
Olive cultivation found its way to ancient Greek life and culture – ‘yaft elokim l’yefes’. The ancient Greeks used to coat themselves with olive oil as a matter of grooming and good health. Olive oil was used to anoint kings and athletes in ancient Greece and was burned in the sacred lamps of temples. It also served as the “Eternal Flame” of the original Olympic games, and victors were crowned with its leaves. The presence of olive trees was recorded by the Greek father of botany, Theophrastus, who noted that olive trees grew in the Athenian region of Greece and generally endured for about 200 years. What B’nei Yisroel used for kodesh, Yavan (Greece) used for chol.

FRUIT HARVESTING
Table olives are classified into three groups, according to the degree of ripeness achieved before harvesting:
Green olives – picked when they have obtained full size, but before the ripening cycle has begun. Usually shades of green to yellow.
Semi-ripe or turning-color olives – picked at the beginning of the ripening cycle, when the color has begun to change to multi-color shades of red to brown. Only the skin is colored, as the flesh of the fruit lacks pigmentation at this stage, unlike that of ripe olives.
Black olives or ripe olives – picked at full maturity when fully ripe. Found in assorted shades ranging from purple to brown to black.
Olives are harvested in the autumn and winter. In the Northern Hemisphere, green olives are picked at the end of September to about the middle of November. Blonde olives are picked from the middle of October to the end of November, and black olives are collected from the middle of November to the end of January or early February. However, the time varies in each country per season and cultivar.
The traditional approach to harvesting involves standing on a ladder and “milking” the olives into a sack tied around the harvester’s waist; this method produces high quality oil. Today, olives are harvested by shaking the boughs or the whole tree. Using olives found lying on the ground can result in poor quality oil due to damage; therefore, a blanket is laid around the tree to catch the fallen olives.
Another mechanical procedure uses a device called an oli-net that wraps around the tree trunk and opens to form an umbrella-like catcher from which workers collect the fruit. An additional harvesting technique employs the use of an electric tool called ‘the oliviera’ which has large tongs that spin around quickly to remove the fruit from the tree. Olives harvested through these techniques are used for oil. Machine harvesting prefers a single trunk olive tree to effectively shake the olives off in an efficient manner.
Table olive varieties are more difficult to harvest, as workers must take care not to damage the fruit; baskets that hang around the worker’s neck are used. In Greece, the olives are harvested by hand because the terrain is too mountainous for machines. As a result, the fruit is not bruised and produces a superior finished product. This method also involves sawing off branches, which is healthy for future production.

CLASSIFYING TABLE OLIVES
Most countries classify olives by size. Spanish olives, such as gordal and manzinilla, describe the trees that bear that particular table olive variety. Greek table olives are classified by their regions of origin.
Greek Olives
The list of Greek olives is varied and quite lengthy. Below are some examples of popular Greek olives:

PROCESSING
Raw or fresh olives are naturally very bitter. To make them more palatable, the olives must be cured and fermented thereby removing oleuropein, a bitter compound, to render the olives edible. There are various washing and fermentation techniques. One method involves washing the olives with caustic soda and brining them in a water and salt solution. The vessels used for brining are called fermenters.
Sicilian or Greek method (olives with fermentation) – applied to green, semi-ripe and ripe olives. The olives are placed directly in fermentation vessels full of brine (8-12% NaCl [salt]) which is changed on a regular basis to help remove the phenolic (bitter) compounds. Caustic treatment is avoided, and lactic, acetic, or citric acid is often added to the fermentation stage to stabilize the process.
Salt-cured (olives with minor fermentation) – applied to ripe olives only and usually produced in Morocco, Turkey, and other eastern Mediterranean countries. Once picked, the olives are vigorously washed and packed in alternating layers with salt. The high concentrations of salt draw the moisture out of olives, dehydrating and shriveling them until they look somewhat analogous to a raisin. After being packed in salt, fermentation is minimal and they are sold in their natural state without any additives.
Water-cured (olives with fermentation) – can be applied to green, semi-ripe or ripe preparations. Olives are soaked in water or weak brine (salt water). This solution is changed on a daily basis for 10–14 days. Fermentation takes place during the water treatment stage. Sometimes, the olives are lightly cracked with a hammer or a stone to trigger fermentation and speed up the fermentation process. Once debittered, the olives are brined to concentrations of 8-12% NaCl (salt) and are ready to eat.

PITTING/STUFFING/FLAVORING AND THE QUEST FOR KOSHER KALAMATA
Not all table olives are created equal, neither are they sold as whole varieties. There are different procedures for flavoring and dressing up the drab green table olive. First and foremost is the famous red strip of pimento that is stuffed into the pitted olive. Do not think for one moment that there is a table of ladies painfully inserting little red strips of red pepper into tiny holes. There are high speed pitting machines that feed strips of pimento paste into the freshly pitted hole in one fell swoop. In fact, there is a whole industry dedicated to pimento paste which produces the red stuffing that famously compliments its green hosts.
However, artisian olive producers do stuff their pitted olives by hand with lemon, almonds and garlic, as well as other varieties including cheese. Some of these stuffed olives would require full-time kosher supervision2, such as table olives stuffed with anchovy or tuna paste. Typically, these fish-stuffed olives are filled by machine in the same facility that stuffs pimento paste. However, the feed line for fish is completely different and is not compatible with pimento fillers.
What is unique about the flavored Kalamata olives and why all the “kosher clamoring”? As mentioned earlier, even after brining Kalamata olives still have a slightly bitter taste and require flavoring. The traditional Greek recipe for seasoning Kalamata olives involves adding non-kosher wine vinegar to the brine. This gave Kalamata olives a delicious taste. Wine vinegar is used for flavor, avida d’taima, which is not subject to the rules of bitul (nullification).
Kashrus agencies have been certifying kosher Kalamatas for over 30 years. How was kosher Kalamata flavored? The answer– glacial acetic acid, otherwise known as synthetic vinegar. This was an economic benefit to the Kalamata producer. Glacial acetic acid is highly concentrated, hence a much cheaper alternative to its non-kosher counterpart.
Despite the price differential and the overwhelming industry-wide use of glacial acetic acid for export, there have been allegations that companies were substituting real wine vinegar for glacial acetic acid. This was due to the fact that they felt it was a better tasting alternative to its synthetic equivalent.3 In order to assure that quality kashrus is not compromised, kashrus agencies in Greece certify kosher Kalamata table olives while a mashgiach is on site at the facility approving the kosher Kalamata production. This ensures that kashrus quality and taste are not compromised and, once again, kosher Kalamatas can find themselves ‘b’shulchonei Shem’.

Kashrus Kurrents would like to thank Mrs. Deborah Anastasopoulos, of Olympian Co., for her assistance with the preparation of this article.