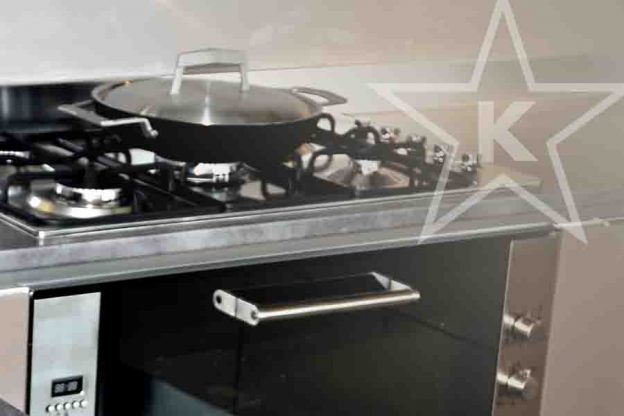 Myth #5: When an oven is in STAR-K Sabbath mode during Shabbos, the oven door may be opened in order to remove some food, then closed, and subsequently opened once again in order to remove more food.
Fact: On Shabbos, when an oven is in STAR-K Sabbath mode and the oven door is opened, all of the food in the oven must be removed before closing the door. On Yom Tov, it is not necessary to remove all of the food when the oven door is opened.
Reason: When the oven door is opened, the thermostat will register the change in temperature and cause the flame to go on sooner than usual. As mentioned above, causing a flame to go on after a time delay is generally forbidden on Shabbos. However, if all of the food is removed from the oven then the flame which goes on in the now empty oven is not beneficial or wanted. An unwanted melacha which occurs after a time delay is permitted on Shabbos.4

Myth #9: Some STAR-K certified ovens come with a cast-iron griddle attachment that is seasoned with a STAR-K kosher certified seasoning.
Fact: The company that produces this oven griddle currently uses kosher vegetable oil for the seasoning. However, as stated in the manuals for these ovens, STAR-K does not give a hashgacha on the seasoning process and advises the purchaser to kasher the griddle before use. This can be accomplished by washing the griddle with soap in lukewarm water and then putting it into the oven at 550° for 45 minutes.
Reason: STAR-K does not have a contract to provide hashgacha for the seasoning of these oven griddles.

Myth #10: STAR-K certification of Sabbath mode ovens has proceeded without incident. If a person notices anything surprising about his STAR-K Sabbath mode oven, he need not contact STAR-K.
Fact: Certain ovens have recently been redesigned in a manner that compromises the Sabbath mode. STAR-K has recently issued alerts on certain models of Bosch, LG and Samsung ovens. These alerts are available at www.star-k.org/sabbath-mode-updates. If you have any questions or concerns about a STAR-K Sabbath mode oven, please contact us.
Reason: Oversights do happen, and consumers are requested to contact us if they see anything unusual about any STAR-K certified product. STAR-K appreciates it when people call with information.