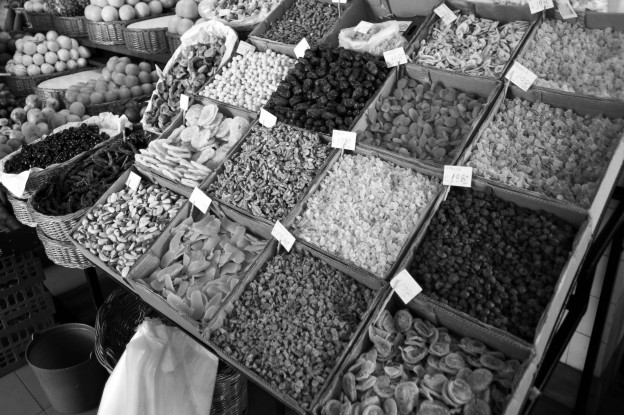 It has been called nature’s candy and is a sweet source of nutrition whose popularity is on the rise.  Commensurate with its growing popularity is its demand.  In today’s global economy, the dried fruit trade literally spans the entire globe – apples from China, prunes from Bulgaria, figs from the Middle East, dates from Tunisia, raisins from South America, and of course apples, peaches, plums, raisins, figs, and dates from the good old U.S.A.  Naturally, this growth presents a whole new set of challenges to kashrus agencies.  How do they send a mashgiach to supervise date productions in Pakistan, raisin productions in Iran, or plum productions in Bulgaria?  Let’s learn about this popular healthy snack alternative.

Fruit is dried through a process known as dehydrating, which removes enough moisture from the fruit to retard the growth of bacteria and mold while retaining the great taste and nutrients of the fruit.  The two most popular methods used to dehydrate fruit are sun drying and tunnel drying.  The best, most cost-effective and least problematic technique is to take advantage of the sun, the Ribbono Shel Olam’s natural dehydrator.

Sun drying avoids many of the kashrus issues that are perhaps problematic in other methods, such as oven or tunnel dried fruits and vegetables.  When a fruit is sun dried, there are no kosher release agents or other processing equipment to consider.  However, there is more to sun drying a fruit than just setting it out in the sun.  Sun drying a fruit or vegetable properly requires great care and know-how.  Every variety has its own protocol.  Turkish apricots, for example, are dried where they are grown – in the Malatya region of East Turkey.  Farmers must exercise great care as the apricots dry.  Sun burning, poor cutting, or mushy fruit ruins this cash crop.  The fruit must be dried to a certain moisture level, gently sliced, and the pit removed.  (Next time you eat an apricot, look at the slit on the side).  The fruit is then dried further to 24% moisture level, until it is ready to be collected and sent for further processing.

Sun drying appeals to the health-conscious consumer because relatively few processing aids are used in the drying process.  However, sun dried fruits and vegetables are not additive-free.  Pesticides are used to prevent infestation.  In the case of light colored fruit, such as apricots or golden raisins, sulfur dioxide is added to lighten the color.  Some fruits use sodium metabisulfite as a preservative.  Ascorbic acid could also be added.  An organic sun dried fruit, however, is typically additive-free.  It contains neither pesticides, additives such as sodium metabisulfite, nor chemicals used for fumigation.  A good example of an organic fruit is a natural apricot, which is much darker in color and has a very different taste than its light colored, sulfured counterpart.

Another method of drying fruit is known as oven or tunnel drying.  The benefit of this method is that the process includes a dehydrator that is climatically controlled, and the fruit is not subject to the moods or pitfalls of Mother Nature.  Nevertheless, the kosher consumer must be aware that inherent in tunnel dried fruit are more processing issues than in sun drying.  It is not uncommon for oven dried fruit to use oils or release agents which require kosher certification.  Some tunnel-dried raisins in Bulgaria are dipped in hot water before drying.  Dried cherries from Michigan, the cherry capital of the world, is an excellent example of tunnel-dried fruit.

Most fruit, once dried, require no additional additives or sweeteners; others, however, do require the addition of processing aids or sweeteners.  For example, some apricot companies season their apricots with fruit flavoring to give their apricots a unique taste.  Potassium sorbate is added to prunes and sultana raisins.  Pineapple, mango, and papaya from Thailand are sweetened with sugars and flavors (kosher certified Thai dried fruit companies have kosher approval for year-round use).

At times, the dried fruit undergoes further processing known as glace, meaning that the dried fruit is cooked in sugar and honey glazed.  Consumers might find glace orange peels from Italy on their supermarket shelves.  Glace is a process whereby liquid sugar – glucose – is infused into the fruit to give it a bright sheen and longevity.  Often the fruit is colored to give a bright luster, hence the name glace.  It is common for glace red cherries to be naturally colored with carmine, a lustrous natural red color derived from crushed coccineal beetles, which are not kosher.  Obviously, synthetic colors do not present kashrus problems, however, carmine does.

Banana chips from the Philippines are another popular dried fruit.  After drying, they are fried in vegetable oil and seasoned with flavorings.  These products obviously require more rigorous supervision.  It is interesting to note that in the Philippines, only refined vegetable oil is used which minimizes the concerns of non-kosher oil.  Nevertheless, kosher certified banana chip plants are monitored regularly.

When you hear the name Thompson, Currant, Sultana or Golden you think raisin.  Raisins are probably the most globally marketed fruit on the market.  They are grown not only in California but also Mexico, Argentina, Chile, Greece, Turkey and South Africa, as well.  They often come into this country in boxes marked “Raisins”.  It is very common for raisin producers to coat the fruit with a minute amount of oil to keep the raisins from sticking.  Some companies use vegetable oil, such as soy or cottonseed; others may use specially formulated oils.  Sometimes, the manufacturer states that the oil is GMO-free or non-GMO.  This designation means that the vegetable seeds or oils used to make the oil are free from any genetic modification.  Typically, these oils are referred to as polishing oils and are kosher certified.

One of the most important areas of the kosher dried fruit industry is Kosher for Passover  fruit, as  well  as  regular kosher. This is a new year-round certification request.  Assuring that dried fruit is Kosher for Passover can be an arduous task.  It is common practice for dried fruit producers to roll fruit pieces in flour to prevent them from sticking together.  Rice flour is commonly used for apricots, oat flour for dates, and soy oil is typically used for raisins.  These products obviously cannot be certified for Passover use.  However, the question remains whether the non-floured dried fruit qualifies for Kosher for Passover certification.  Before certifying any fruit for Passover, great care must be taken to ensure that the non-floured whole dried fruit is adequately segregated from the floured pieces, or that ascorbic acid is not used in the field. Many companies flour their fruit pieces in a separate room or separate area in the plant.  However, this does not always guarantee segregation.  In one instance, it was discovered that the flour shaker used to coat the date pieces created an oat powder cloud which spread and covered the packaging belts in an adjoining room. For Passover certification, this situation was disastrous.  The solution was to package the Kosher for Passover dates in a different packaging area of the plant.

In the past, we have had requests for Kosher for Passover sugar sweetened pineapple from the Philippines.  When we researched the project, we discovered that corn syrup was commonly substituted for liquid sucrose.  The rabbi told us that it would be very difficult to segregate sugar lines “…even if the mashgiach would live in the factory.”  Needless to say, we did not do a Kosher for Passover production.

In Argentina, we faced a different Kosher for Passover issue.  A manufacturer wanted to import prunes that were specially produced for Passover use.  In his facility, only prunes were processed in drying ovens.  The company took great pains to clean the ovens for this production, and everything appeared to be in order … except for one item.  Potassium sorbate was sometimes added to the prunes to regulate their moisture level.  It is usually not difficult to purchase synthetic Kosher for Passover potassium sorbate in the U.S.  However, the particular potassium sorbate that this company used has been produced in China, which today is a major player in the manufacture of chemical food ingredients.  Typically, Chinese potassium sorbate is a derivative of corn or rice, which is a kitniyos (legume) source.  Consequently, this manufacturer’s product was disqualified for Pesach use.

To Check Or Not To Check –That Is the Question

Along with the rise of general consumer awareness, one of the most daunting kashrus challenges that kosher certification faces today is making sure that fruits and vegetables are halachically insect-free. Kosher food certification is now working with effective pest management programs in the field, as well as cleaning/washing procedures and preventative measures in their processing facilities.  However, we know that with all the herculean efforts and well meaning intentions, nature is still nature and no system is infallible.

Halacha clearly forbids us to eat toloyim, insects.  The halacha also  tells us that the obligation to check for insects in a fruit or vegetable is directly tied to the regularity and propensity of insect presence in a particular fruit or vegetable.

In short, fruits and vegetables can be categorized into four general groups:

The need to control infestation and disease is of paramount concern for any fruit producer, dried fruit notwithstanding.  If an infested container was used for a shipment, that container would be rejected and the manufacturer would suffer a great loss. All dried fruit is subject to some insect control.  When dried fruits enter the production facility, they are placed in a special chamber and are treated with methyl bromide, a gas used to kill any insects.  These fruits are then washed.  The insects are then separated from the fruit before going through further processing.  Furthermore, as an added precaution, if the fruit remains in the factory for 90 days this treatment is repeated.  Even organic fruit is subject to some degree of treatment for possible infestation, usually involving freezing the fruit to kill any insects.

Based on these processing practices, statistics indicate that as long as the dried fruit is properly stored in a cool and moisture-free environment, infestation should be minimal.  However, storage conditions that are less than optimum can promote new infestation.  STAR-K ensures that proper insect control is in place at each production facility that it certifies.  However, once it leaves the production facility proper storage conditions are beyond the hashgacha’s control.  As such, there are a number of dried fruit items that are more susceptible to infestation and STAR-K recommends checking a few of those items in each container in order to ensure that it was properly processed and stored (i.e., dates, figs and carob).

Undoubtedly, with our greater understanding, we will certainly appreciate the efforts of all of the hardworking men and women throughout the world who bring us these popular treats and allow us to truly appreciate the fruits of their labor.

[1]. STAR-K follows the opinion of the Mishkenos Yaakov that the cut-off point between a miut hamatzui and aino matzui is 10%.  This means that if an insect is found in 1 out of 10 portions, the insect presence in such a variety is considered miut hamatzui and the variety must be checked before eating.  For example, if one is checking dates a portion size is four dates.  Therefore, if one checked 40 dates (10 portions) and they were 100% clean, the dates would fall into the aino matzui category, and no further checking would be necessary.  If any insects were found in the sample, it is considered miut hamatzui.