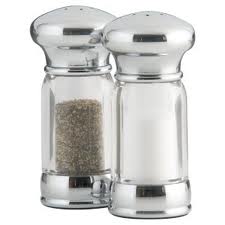 The use of spices in preparing food has played a role in history disproportionate to their nutritional value. A ransom paid by Alaric the Goth that included three thousand pounds of pepper delayed the attack of Rome for two years. The discovery of the New World was due, in great measure to the search for such spices; that was the main objective of the early trans-Atlantic explorers. Our Rabbis tell us1 that the Torah is compared to salt and the Mishna to pepper. Indeed, the kashrus issues related to salt and pepper give us sufficient reason to analyze these primary food ingredients.

Ironically, salt is the king of spices. Its importance transcends its use as a flavor enhancer. Although excess consumption can pose a problem for some individuals, salt is a necessary component in human nutrition. Its importance is even reflected in the terms we use. Roman soldiers received part of their pay in salt — sal in Latin. From this we derive the word salary.

Salt, a natural mineral (sodium chloride), is “mined” from underground deposits. Salt mines – the fabled destination for the politically undesirable – generally are no longer used to recover this mineral for food use. Although salt used to melt snow and ice may continue to be dug from the ground, such salt contains too many impurities for general use.

The salt we eat is called evaporative salt. It is removed from the ground by pumping water into an underground salt deposit, and collecting the liquid brine that is formed as the salt is dissolved into the water. This brine is then heated and concentrated, evaporating the water and allowing the salt to crystallize. These crystals can be grown to many different sizes. For example, the term “corned” beef comes from the use of oversized corn-like salt crystals that are used to coat and preserve the meat. The size of the crystal is determined by the manner in which it is allowed to crystallize. “Kosher” salt is merely salt that is crystallized into larger particles, which are particularly suited for salting meat in order to remove blood.2 Some culinary experts prefer to use kosher salt because it generally contains no additives (see below). The larger salt crystal may disperse its flavor in a particular fashion. Chemically, however, kosher salt is identical to all other pure forms of salt.

The fact that our table salt is produced in this manner has an interesting halachic ramification. The Shulchan Aruch3 discusses whether one is allowed to put salt into hot food on Shabbos, since such heat may cook the salt. The Mishna Berura notes, however, that this concern applies only to salt that is mined from the ground. Salt that is produced through boiling (i.e. evaporating) is considered to have already been cooked and therefore not subject to the same concern. Sea salt, however, is generally produced by solar evaporation. Heat from the sun has a different halachic status than heat produced by combustion, and such salt may not be heated to a temperature that is considered cooking. This would leave solar evaporated salt subject to the original concerns of cooking on Shabbos.

Salt, however, may not be entirely pure. For example, it may be used as a means of delivering a necessary, but unrelated, nutrient. Goiter, a disease of the thyroid gland, results from a deficiency of iodine in the diet. Fifty years ago, nutrition experts developed iodized salt. Today most table salt contains this nutrient in the form of potassium iodide. Potassium iodide, however, tends to degrade in the presence of moisture; in order to protect the iodine, a small amount of dextrose often is added to the salt to prevent oxidation. While not generally a kashrus concern, dextrose is derived from corn (and sometimes, wheat) starch, and therefore poses an issue for Passover use. It is for this reason that we purchase non-iodized salt for Passover. Ironically, it is the preservative – and not the iodine itself – that poses the problem.

Other ingredients, such as calcium silicate or yellow prussate of soda, are added to table salt to ensure that it pours even in humid conditions and poses no kashrus concerns. Certain salts used in industrial applications, such as glycerated salts contain glycerin. Other large crystal salts may contain polysorbates. These industrial salts do indeed pose kashrus concerns. Sea salt contains numerous trace minerals found in seawater, and tends to impart a slightly different flavor due to these elements. From a kashrus perspective, however, they are not significant.

Pepper is, perhaps, the second most popular spice. The term “pepper” however, has suffered from the same historical error as that perpetrated upon the American “Indian”. When Columbus mistook the West Indies for the East Indies, and misnamed its hapless inhabitants, he also confused the spices he found in the New World with those he sought in the Old. Classic peppers are the fruit of the vine piper nigrum L, which grow in long pods of small berries called peppercorns. When Columbus landed in the West Indies, however, he found chile plants that looked similar to the clusters of peppercorns he was seeking. However, since their flavor could mask the rancid taste of the ship’s stores that were the lot of the seafarer, these pungent vegetables were very popular with these explorers.4 Columbus quickly named these peppers, and this source of confusion has been with us ever since. Indeed, one can only learn the Gemara5 properly with this distinction in mind. The Gemara discusses “long peppers”6, which actually refer to the long pods of peppercorns and not long garden peppers that are common today.7

Given this linguistic complication, the term pepper refers to a number of unrelated items. When the immature fruit from the classic pepper vine is harvested and dried in the sun, it turns black and is called black pepper. When the fruit is allowed to mature on the vine and then dried, it remains white. Green peppercorns are prepared from unripe berries that are preserved in brine. On the other hand, cayenne pepper (also known as red pepper) is actually a variety of chile noted for its pungent taste. Similarly, paprika is a variety of chile adopted by the Hungarians. They guarded it so jealously that they prohibited whole seeds from being exported, lest their spice jewel be grown elsewhere.

Pepper, no matter what the gender, does not pose any year-round or Pesach kashrus concerns. However, it has been documented that in order to maintain color consistency in paprika, companies will blend oil into the paprika and still call it pure. Therefore, care should be taken to purchase paprika with reliable kosher for Passover certification.

Our Rabbis explain8 the verse in Yeshayahu9, “The bread of the serpent is dust,” as follows: Even if the serpent eats all the delights of the world, it will only sense the taste of dust. The curse of the serpent was that it would be incapable of deriving the satisfaction of tasting the food that he ate.

People have the ability to appreciate the flavor of food, and man has found numerous ways of enhancing its taste. The Torah itself is called tavlin,10 spice. Spices and other flavorings add an important dimension to both our food and the halachos relating to its kashrus. Our responsibility, therefore, is to ensure that it is saturated with the taste of Torah.

4 In halacha, this concept is referred to as mechalya lei l’shvach (Avodah Zarah 39a), whereby a pungent spice can overcome an otherwise objectionable flavor.