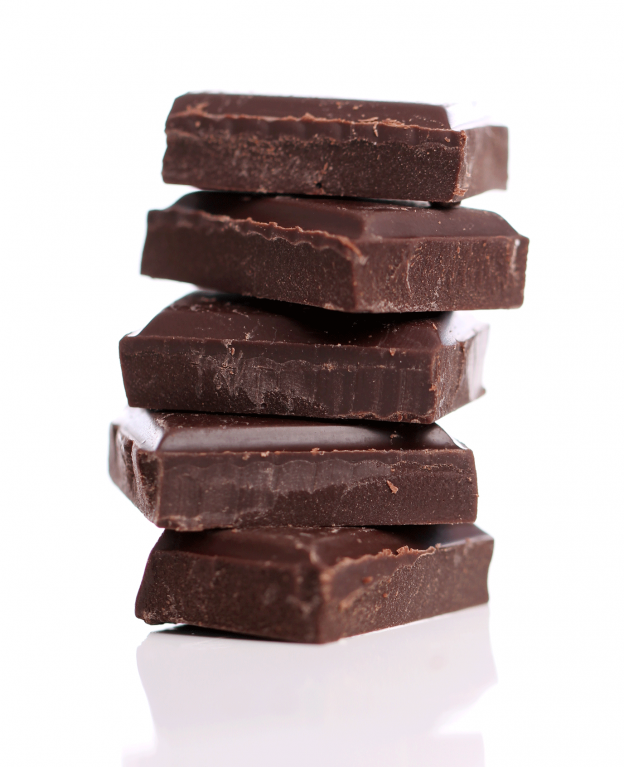 “Now dear you must eat your fruits and vegetables!”

“Great what did you eat?”

Chocolate is surely nature’s sweetest combination of fruit and vegetable, sugar and cocoa beans. Chocolate, the king of confections, continues to grow in popularity. Kosher chocolate is a delicious study of technology and halacha. Let’s explore the intoxicating world of chocolate.

King David, Dovid Hamelech, extols Hashem’s acts of loving kindness by proclaiming metaphorically that he desires to drink from “Your river of delight,” “minachal adonecha tashkeim.” What is a river of delight? Let me give you a first-hand explanation. Before Hershey Park built Chocolate World, tourists were treated to a tour of authentic chocolate-making. Clearly etched in my childhood memories was a delicious river of chocolate cascading into a chocolate-fall of millions of Hershey bars and Hershey kisses. It was awesome, to say the least.

Over the years, chocolate manufacturing has continued to grow both domestically and internationally. Chocolate connoisseurship has reached new heights. Believe it or not, the most expensive chocolate today costs in excess of $90 a pound. The chocoholic delights at the sight of Belgium truffles, French bonbons, Swiss chocolate, and other chocolate bars that abound. Today, most major chocolate manufacturers in the U.S. have reliable kosher certification. Some specialty chocolate manufacturers are kosher certified as well. Cholov Yisroel chocolate in particular has recently seen unprecedented growth. Today a cholov Yisroel consumer can feast on a Mars bar counterpart without having to compromise on taste or quality.

Chocolate raw ingredients make a long trek before becoming a familiar chocolate bar or chocolate covered cherry. The prime ingredient in chocolate is the cacao bean, which grows in many regions of the world, including Africa, Central America, and Southeast Asia. Two main varieties of trees produce cacao beans: the Forastero tree in West Africa which produces commodity quality cacao beans, and the Criollo tree, found in Venezuela and other South American countries, which produces premium quality cacao beans.

The first stage of cacao bean processing is harvesting, which may be done by machete – a slow and tedious process, or by automatic shakers that shake an entire tree free of the cacao pods. Next, the pods are cracked open and the cacao beans are removed. Note that cacao beans, when processed for commercial use, will become cocoa beans. Cocoa beans are then spread out in the fields to ferment and sun dry, ridding the cocoa bean, also known as a nib, of much of its natural bitter taste and moisture. Once dried, the cocoa beans are packed in jute sacks and shipped overseas to the chocolate manufacturers for further processing.

The cocoa bean is one of Hashem’s most dormant creations. In order for its potential to be fully realized, it requires processing to unlock the quality products contained within. The raw cocoa beans are cleaned and roasted in giant roasters – much like a coffee bean to unlock the nib’s delicious cocoa flavors. The cocoa bean is then ground into a paste known as cocoa liquor, the primary ingredient of chocolate. Cocoa liquor made from premium cocoa beans is rich enough to be made into chocolate. Cocoa liquor made from standard cocoa beans lacks richness and therefore cannot be made into chocolate without the addition of cocoa butter.

What is cocoa butter? The cocoa bean has over 50% natural fat. When squeezed under enormous pressure in a hydraulic press, the cocoa bean exudes fat that is yellow in color, similar to rich dairy butter. Hence the name cocoa butter. Unlike dairy butter, however, cocoa butter is thicker, blander, and hardens at room temperature. What remains behind in this extraction process is a massive solid cake which, when ground, will be known as – you guessed it – cocoa powder. Ironically, for the chocolate manufacturer, the main commodity product is the cocoa butter, and the by-product is the cocoa powder.

As any good cook or baker will tell you, there are certain tricks of the trade that set a great product apart from a good product. The trick of the chocolate trade is the blending, also known as conching. The conch is a large rotary blender that blends the chocolaty mass for hours on end at a temperature of 140°F. Depending on the recipe, the chocolate may be conched for over 12 hours in order to fully homogenize the ingredients. Lecithin, an emulsifier, is added to help blend the ingredients. Conching releases any bitter aromas and flavors in the liquefied chocolate, and allows all the remaining delicious chocolate flavors and aromas to fully mature and develop into a symphony of chocolaty taste.

With this overview, let us examine the issues that confront kosher chocolate making.

Interestingly, ingredients used in European chocolate processing present many more challenges than in domestic chocolate production. In Europe today, genetically modified raw materials are strictly avoided. One essential product in chocolate manufacturing is lecithin, which, as previously mentioned, serves to emulsify and blend the ingredients being conched. Lecithin is made from soybeans. Nearly all soybean crops worldwide have been genetically modified. Consequently, lecithin has come under European fire.

It goes without saying that the vegetable fats used to manufacture kosher compound chocolate must have reliable kosher certification because these vegetable fats can be produced in the same facilities as tallow or lard.

What is the greatest nemesis to chocolate? Just ask any balabusta who uses melted chocolate in homemade recipes. Water, when mixed with chocolate, even minimally, causes the chocolate to solidify almost instantaneously into a solid block that can’t be remolded! Consequently, chocolate manufacturers passionately avoid the introduction of water into their facilities at all costs. Recognizing this problem, how do kosher chocolate manufacturers overcome the issue of compatible conches that may be used indiscriminately for pareve and dairy chocolates without using water?

One possibility is to dedicate conches exclusively for dairy and pareve productions. This method is used in certain chocolate production facilities because sufficient amounts of both pareve and dairy products are manufactured to justify the separation. However, many companies do not keep their conches separate. Furthermore, there are companies that produce cholov Yisroel chocolate for this growing market. Since these products are made in non-cholov Yisroel facilities, the non-cholov Yisroel conches would require kosherization. How can the conches be kashered without the introduction of water?

This problem has plagued chocolate manufacturers for many years. The solution is to kasher the conches with liquid dark chocolate, or in terms of the halacha, sha’ar mashkim, literally “other liquids.” The Shulchan Aruch poses the question whether liquids other than water may be used for kosherization. The Remah is opposed to using sha’ar mashkim and forbids the use of sha’ar mashkim for kosherization. However, the Remah permits kashering with sha’ar mashkim if one has already done the kosherization post facto, b’dieved.1 The Star-K, does not kasher with shaar mashkim. However, in some kashrus agencies in the U.S. and among the Rabbinate in Europe, the prevalent view is to rely on the lenient position, even though the Shulchan Aruch frowns upon that method of kosherization.

Another interesting caveat to this question is whether liquid chocolate, or more specifically cocoa butter, which is a solid at room temperature, may be considered a liquid and could therefore be used as a kashering liquid. Interestingly enough, when the Mishna Berura discusses the issue of egg matzah, the Chofetz Chaim zt”l mentions that fats are categorically considered a liquid,2 sha’ar mashkim, and would be permitted to be used as a kashering liquid for those who allow this type of kosherization.

What Bracha do we make on Chocolate?

As we saw through our tour of chocolate manufacturing, the cacao bean is the fruit of the Forestaro and Criollo trees. However, the cocoa bean is indistinguishable in its chocolate form. The question is: Does a fruit product that has been pressed into a paste, such as dates into date paste or apricots into fruit leather, retain its borei pri ha’etz status because the original product in its pressed version is recognizable? The Shulchan Aruch3 concludes that since the fruit product retains its original status, the bracha does not change. However, the Remah explains that this is not the case regarding a fruit that totally loses its original form. Therefore, the proper blessing for chocolate would be shehakol. However, another halachic opinion posits that since the cacao bean was grown for the purpose of making chocolate, this is the essence of the fruit. In spite of the fact that it loses its original identity, the bracha should be borei pri ha’etz. The case in point in the Shulchan Aruch4 discusses spices that were ground and sweetened. The bracha that is to be made on sweetened ground spices is borei pri ha’etz because spices are made to be ground. Applying the same logic to the cacao bean, meaning that the purpose of the cacao bean is to be ground and liquefied into chocolate, the bracha on chocolate should be borei pri ha’etz. In fact, there are some poskim who opine that the bracha on chocolate should be borei pri ha’etz, and not shehakol. However, the consensus of halachic opinion is that the bracha is shehakol.

Earlier, we mentioned that chocolate is over 50% sugar. Sugar is processed from vegetables such as sugar cane or sugar beets. In truth, the Shulchan Aruch also deals with the bracha on sugar.5 In any event, the amount of sugar used would not affect the bracha on chocolate, since the purpose of the sugar is to sweeten the cocoa ingredients. Sugar, therefore, is viewed as a secondary ingredient to the cocoa liquor, even though sugar is chocolate’s primary ingredient.6 According to all opinions the bracha remains shehakol.

In the case of chocolate-covered nuts and fruits such as peanuts, almonds or raisins, does the combination of chocolate with nuts or fruits affect the bracha? Most definitely! However, there are many opinions regarding the proper bracha. The Mishna Berura7 views the fruit as the dominant ingredient, and the chocolate that sweetens the fruit as secondary. The bracha on chocolate-covered fruits and nuts would follow the item that the chocolate is sweetening; in the case of fruit or nut, borei pri ha’etz, and in the case of peanuts, borei pri hoadama. However, others reason that the bracha is subjective and would follow the item that is more desirous.8 Still others maintain that the item that is more plentiful would be the dominant ingredient, while some halachic authorities maintain that one should make two brachos on chocolate-covered peanuts because both are of equal importance.9 Interestingly enough, the bracha borei pri ha’etz would suffice, b’dieved, for a chocolate and fruit combination because, in any event, the bracha on chocolate may be borei pri ha’etz,10 as we mentioned earlier. Rabbi Moshe Heinemann, Shlit”a, Rabbinic Administrator of the Star-K, maintains that the bracha is subjective. If the chocolate is more desirable, the bracha would be shehakol; and if the raisin is more desirable, the bracha on a chocolate covered raisin would be borei pri ha’etz.

King Solomon, Shlomo Hamelech, when extolling the virtues of Bnei Yisroel, Torah, and mitzvos exclaims metaphorically “Vayochal p’ri megadav,” “and he ate His delectable fruits.” Indeed this verse could certainly apply to the delights of chocolate, the most delicious fruit of the world.