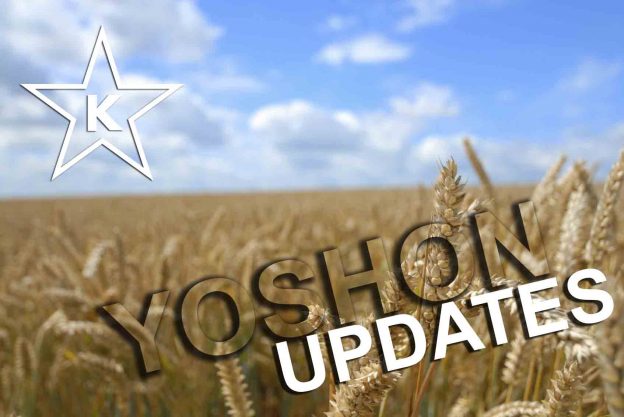 Yoshon season 2022-2023 has begun. Below you will find the STAR-K Yoshon Quick Reference Guide for many common products.

The information in the Quick Reference Guide is based on a combination of direct company sources and by researching The Guide to Yoshon, which is now updated and published annually  by the family of Rabbi Yosef Herman zt”l.  Although the finalized Guide to Yoshon has yet to be published for this year, we have been able to use early drafts to update much of the information in our Quick Reference Guide.

As there will likely be changes to the Herman Family guide over the next few weeks, it is worthwhile to check back here weekly for updates to STAR-K’s Yoshon Quick Reference Guide. A link to the guide appears below.

In addition, every year we publish an up-to-date list of Baltimore establishments and the Yoshon and Pas Yisroel status of their products. A link to the list appears below.

The Torah (Vayikra 23:14) states that the new (i.e., Chodosh) crop of the five grains may not be eaten until after the second day of Passover (i.e., in Israel; outside of Israel, not until the third day). This means that the grain harvested this summer would not be allowed until Passover of next year (i.e., 2023/5783). The term Yoshon (literally, old) refers to crops harvested last summer that became permitted after the following Passover. Thus, the 2021 crop of grains, harvested in the summer of 2021, became permitted after this last Passover (i.e., 2022/5782). Grain planted at least two weeks or more before Passover are permitted upon harvest (see Dagui Mervaya Y.D. 293) since they took root before Passover.

Outside of Israel, there are various customs based on numerous sources whether or not one needs to be stringent about only using Yoshon products. Each person should consult their rav for guidance. In Israel, however, these leniencies do not apply. Therefore, any Israeli product bearing a reliable kosher certification is definitely Yoshon.

Wheat in the USA has two planting seasons a year: winter and spring. Winter wheat can be planted anytime between October and February. The wheat grows to a young plant stage and remains in a stalled vegetative state until spring, at which time growth resumes. Once the wheat matures, it is harvested, usually in late spring/early summer. Spring wheat is planted between April and June and harvested as soon as it is ripe, typically 6-12 weeks after planting (usually at the end of July).

Since winter wheat is always planted at least two weeks before Passover, it is always Yoshon. Spring wheat, however, is planted right around Passover and (so far) never more than two weeks before, and is thus always a Chodosh concern. Unlike wheat, the remaining four grains are single-season crops. Oat and barley are spring crops, planted around Passover and harvested in the summer, and therefore pose a Chodosh concern. Rye and spelt in the USA are winter crops and therefore never Chodosh.

Between Passover and the end of the summer (roughly mid-August), all grain products are permitted because they are all either from a winter crop or the previous year’s spring crop. The new spring crop enters the market around August, which signals the start of the ‘Yoshon season.’ At that point, any products containing the new spring wheat, oats, or barley may not be eaten by those who adhere to the stringency of Yoshon until after Passover of the following year.

STAR-K policy does not require our certified grain products to be Yoshon. However, any grain products made available at STAR-K certified establishments (e.g., all local bakeries) and characterized as Yoshon, or retail products that make a Yoshon claim on the label, are required to be certified as Yoshon by STAR-K. This means that STAR-K’s oversight program will include verifying the Yoshon status of all products we certify that are marketed and/or labeled as Yoshon.

The Guide to Yoshon by Rabbi Herman explains how to read the codes on various products to ascertain if they are produced from Yoshon or Chodosh grains. Due to the difficulty some people have in using the Herman Family guide, each year we prepare an abridged ‘Quick Reference‘ guide available here that contains the most commonly used items and the date code information for those products.

Please refer to the Guide for product information, and consult the local Baltimore establishment information list as needed. Since Yoshon availability can change at any time, consumers are urged to check with the mashgiach at each establishment (or look for posted signs) prior to eating or shopping to ascertain Yoshon status. At catered events, the Hashgacha cards will always list the Yoshon status for that event.