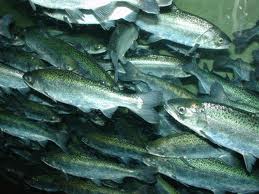 The following article describes the saga of two diverse Star-K fish productions in two very different parts of the world – Kodiak, Alaska, and Sarong Irianjaya, Indonesia. Salmon is produced in Alaska, and tuna is produced in the Far East. Traveling to both locations is equally arduous and each location presents its own set of challenges to the traveling Mashgiach.

SALMON: The Alaskan salmon season is short and fickle. The salmon season only lasts six to eight weeks during July and August, and there is no guarantee that quality salmon will be caught or that the weather will cooperate. As will be shown, the quality of fish and the cooperation of the weather have to work in unison so that the Mashgiach and company workers can successfully produce kosher salmon. Unfortunately, this is not often the case.

Reaching the remote cannery is not an easy task. To fly to Kodiak, Alaska, one must take a flight to Anchorage and take two commuter flights that will eventually land off Kodiak. The last segment is taken in a pontoon plane because the plant has no runway. In order to reach the cannery, the plane has to land in the water off the island. Alaska is frequently subject to inclement weather, heavy fog, high wind, and rainstorms. Due to these adverse flying conditions, it is not unusual to cancel the two seater cargo plane flights. Indeed, Mother Nature could potentially cancel the complete production.

To deal with this reality, tight production schedules are not recommended. Workers, inspectors, and Mashgichim must leave themselves ample time in Anchorage so that if the weather clears, they will be ready to take the flight at a moment’s notice. Upon arrival in the cannery, the next, and most important challenge has to be hurdled. Is there fish available for production, and if there is, is the quality acceptable? Once the weather cooperates, fish availability, and fish quality issues are resolved, the cannery has to be transformed into a Star-K Kosher approved fish production facility.

The Star-K has a very organized and stringent system for fish plants. First and foremost, the Mashgiach must personally meet each fish, check for fins and scales, and approve them one by one. Salmon enters the plant at a very rapid rate from the troller ship, and the Mashgiach must don full fisherman’s gear in order to position himself accordingly on the production line so that he can see each fish clearly.

Equipment, racks, and retorts must undergo proper kosherization. Boilers and fires must be turned on to fulfill Bishul Yisroel requirements. Tracking systems insuring that the raw salmon viewed as it entered the plant is indeed the product that is being canned, retorted, and labeled have to be established. A Star-K Mashgiach does not leave the plant without full fish accountability.

Today, most tuna productions take place in the Far East, and travel to Asia is quite extensive. Since most tuna productions commence on a Sunday night or Monday morning, and one loses a day when crossing the International Dateline from the United States (see Kashrus Kurrents article “A Traveler’s Guide to the International Dateline”), the Mashgiach often leaves on the Tuesday or Wednesday prior to the start of the scheduled production to give himself ample travel time. Shabbos is spent in a location near the facility so that production can start on Sunday as planned.

Before production can begin, the tuna facility must be kashered. Effective Hashgacha is to an extent based on a relationship of mutual respect between the Star-K Mashgiach and foreign companies who don’t understand what is being done. Over the years, the Star-K has maintained a very good relationship with numerous factories in the Far East, easing the facilitation of the Star-K’s high standards with a minimum of confusion.

The plant must be thoroughly cleaned before kashering can commence. All cookers and equipment are thoroughly cleaned. Then, the cleaned equipment, butchering knives, carts, and tables are kashered, as are the fill lines, holding tanks, cookers, and baskets. Successful cleaning and kashering is achieved with a spirit of cooperation and coordination.

Often more than one production is taking place in the facility. Furthermore, large tuna plants employ 500 to 800 people, most of whom do not speak or understand any English. Needless to say, an effective production system must be put into place under less than perfect circumstances. Once the plant is kashered, and a production system has been set up, the Star-K tuna production may begin.

The process begins by dividing the tuna into species: albacore, skipjack, tongol, or yellow fin. Each variety is produced separately from all others. The variety selected for production is defrosted, sized, and brought to the first set of work tables. The fish is inspected by the Mashgiach, and then gutted, cleaned, and steamed. In order to avoid Bishul Akum, the Mashgiach must turn on the boiler which creates the steam for the plant and the steamers.

After gutting and steaming, the tuna goes into a cooking chamber, where the fish is misted and cooled rapidly. This facilitates the skinning and cleaning of the fish. Once the fish is skinned and the head has been removed, the tuna is ready to be packed. Very clean tuna loins are categorized as “solid white” or “solid light,” depending on the species of tuna. Tuna pieces coming off the cutting machine are commonly known as “chunk white” or “chunk light.” Scraps and dark scrapings are canned as cat food.

Star-K tuna is produced additive free and primarily in brine (water and salt). However, that may not be the case with other products produced in the facility. It is possible that elsewhere in the facility other products are being produced, some products are clearly chometzdik and others are not Kosher. The Mashgiach must ensure that the steam that heats the other cooking equipment is not captured and recycled through the factory to the area where the Star-K production is taking place. This concern for complete plant segregation applies not only to steam, ovens, and equipment, but to the workers personal equipment, especially their filleting knives. Often, these knives are taken home by the workers. For Star-K productions, care must be taken to ensure the knives don’t mysteriously walk away and are kept under lock and key in the facility.

As was mentioned earlier, mutual respect between the Mashgiach and the company is fundamental to a successful tuna production. Unfortunately, this is not always the case; unfortunate for the company whose workers and managers did not follow Star-K regulations. The production for that company would have to be, and has been canceled.

At one time, Taiwan was the leading tuna producer in the Far East. As Taiwan became more prosperous and wages rose, the very intensive tuna production was moved to Thailand. Now, Thailand is following in Taiwan’s economic footsteps and productions are shifting to Indonesia. In the future, Cambodia and Vietnam will be processing tuna.

The image that tuna is produced on large boats is no longer true. Tuna is a very land based activity. Although tuna production is a high labor, low wage production, these factories have provided laborers with clothing, wages, and structure in their lives. Surprisingly, these people are economically better off under this type of enlightened corporate capitalism.

Long distance kashrus productions are both challenging and rewarding. I am very happy to have the opportunity to do this important work on behalf of the Star-K for the kosher consumer.