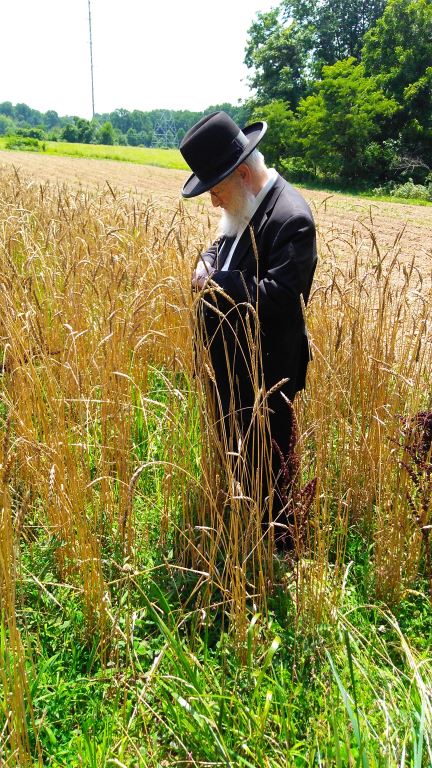 The hefty $20-$50 price per pound of handmade shmura matzah may cause you to raise your eyebrows, especially when comparing it to the price of machine-made matzah, but if you only knew what goes into manufacturing the crisp, paper-thin, artisanal specialty item you would understand why it is so pricey.

To keep up with the increasing demand for handmade shmura matzah, matzah bakeries around the world start baking as early as October! But, actually, the labor-intensive process of producing STAR-K certified shmura flour began a few months before, in July. That is when HaRav Moshe Heinemann visited the 28-acre Migrash Farm—located inside the Chesapeake Watershed, just a stone’s throw from STAR-K’s Baltimore headquarters. The farmer, R’ Yosef Hertzmark, who doubles as a STAR-K menaker, accompanied the Rav as he walked the fields to supervise the shmura wheat harvest, deeming its extra level of scrutiny– “shmurah m’shaas ketzira” (guarded from the time of harvest).

The flour’s supervision began even earlier than July 11: it started when the grain was planted, last fall, to ensure the crop would be yoshon, and then when the plants started to form seed heads, these were monitored for grain fill and sprouting. Once the kernels start to harden—but, before they sprout new shoots—the wheat is plucked. Since it will be stored until it is milled months later, it must be guarded and stored in a climate-controlled environment. If it is too dry, it will have poor milling qualities and thus poor baking qualities; if it is too moist, it could become moldy and or chometz. As its Hebrew name “shmura” implies, the ingredients that go into this type of matzah are “guarded” against leavening, or becoming chometz, by taking extra precautions.

The shmura wheat manufacturing process is not simple. An understanding of the general life cycle of the crops and the harvesting process will give you a better understanding of what is involved. The planting takes place in the fall; there is initial growth and then dormancy in the winter; there is heavy growth in early spring; and, finally, the flowering and grain set in early summer. The harvesting process includes: the cutting of the crop in the field; threshing the crop to separate grain from chaff; winnowing to clean separated grains from the stalks and chaff; and, drying down grains to 14-16% moisture for storage.

To properly understand the cereals in the context of shmura matzo (and yoshon), the two main areas of understanding and experience are: 1) grass anatomy and morphology, i.e., what are the different parts/structures of the plant and how do they vary between varieties and species; and 2) crop phenology, i.e., how the crop develops and grows through its lifecycle.

“Regarding structures, we are primarily looking at the grain heads (shiboles in Hebrew) and then specifically at the grains themselves,” notes R’Yosef. “Are the kernels cured or are they starting to grow?  We check this both in the field before harvest and in storage.  For the life cycle, we are interested in when the kernel starts to root in the ground after seeding the field as this determines that crop’s status relative to yoshon.”

Because we require an unadulterated grain crop for shmura matzo, we concern ourselves with other seeds that might mix in with the crops.  There are many field crops and weeds that share a similar seasonal timeframe with the grain crops and if mixed in to the grain crop during harvest and/or storage, and ultimately milling, these seeds would posul the shmura crop because many of them are kitnyos.

“In general, these field crops grow in solid stands and anywhere where they might border each other, there might be a little overlap and mixing,” clarifies R’Yosef.  “We try to avoid these edge areas because of this, and similarly, we are vigilant as we are harvesting, looking for any weeds or field crops that might adulterate the crop.  These weeds and non-target crops are generally hand pulled or avoided by the combine, altogether.  Because it is impossible to avoid all non-target individuals and we expect some small amount of weed seed, we will be cleaning and sorting the grain by size, shape and density as many times as we need to, to ensure that no other seeds are mixed into the final millable product.”

To ensure that the harvesting, cleaning and storage equipment is free from non-shmura grain or potential adulterants, all the equipment must be thoroughly cleaned.

“We first take apart and open all machinery as best as possible, and while running, we alternately blast it with compressed air and industrial vacuuming,” describes R’Yosef.  “We then do it all over again while the unit is put back together and running.  We repeat these steps until the machinery runs clean and no more material is being blasted around or vacuumed up.  This same process is done for the harvesting, cleaning and storage equipment.  We do not have to kasher the equipment as there is no bishul happening anywhere in the process.”

STAR-K Kashrus Administrator Rabbi Zvi Goldberg accompanied HaRav Heinemann to Migrash Farm, and concludes: “I’ve had the zechus to see Rav Heinemann in many areas of halacha–selling a Jewish-owned animal to avoid the concerns of a bechor; selling chometz; checking esrogim, and so on–but I’ve never seen the checking of a shmura field. When I heard the Rav was checking one nearby I jumped at the opportunity to observe this. The Rav checked three areas to be machzik that the kernels had not become chometz. When he made a brocho (hoadomo) and ate some, at first I didn’t realize that it was part of the process to ensure that they are hard and not soft. The Rav joked that you can tell it is ready if it breaks your teeth!” 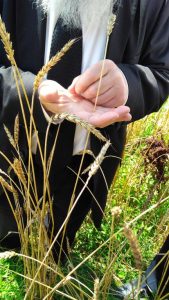 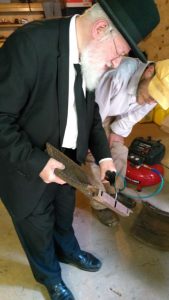 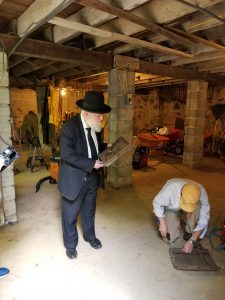 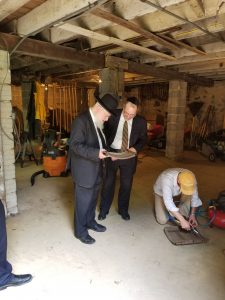 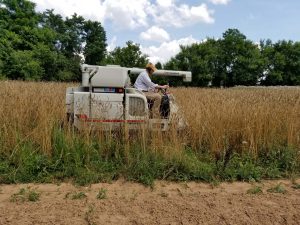