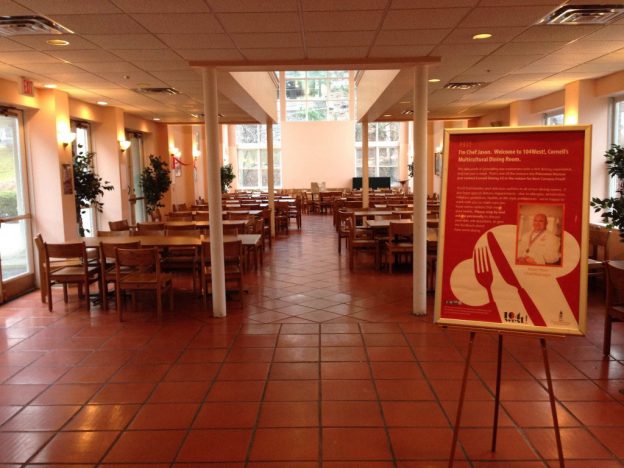 The logistical challenge of feeding 400+ Cornell University students and staff members Rosh Hashanah dinner in “Trillium at Kennedy Hall” and an overflow in an outside tent–in addition to two daily meals throughout the school year– was one that STAR-K Kashrus Administrator Rabbi Mayer Kurcfeld was up for. Cornell’s 104 West! and It’s Kosher– the campus’ satellite kosher dining station at North Star Dining Room—is presently the sixth college kitchen under this campus kashrus expert’s supervisory guidance.

Cornell upperclassman Sam Baer, president of the college’s Center for Jewish Living, first approached STAR-K Kosher Certification in March, 2015, about the possibility of certifying an on-campus kosher kitchen. After making three 12-hour roundtrip drives from Baltimore to the Cornell campus in Ithaca, New York, the STAR-K and STAR-D logos were awarded in time for the Fall Semester.

One of the factors unique to certifying a college kitchen versus a restaurant is finding just the right 24/7 mashgiach “shidduch”. In this case, someone who is not only competent but willing to live on campus—since there is no frum kehilla or shul besides the one on campus. Rabbi Kurcfeld opted to hire a qualified couple so a spouse could fill in should the need arise.

“After an extensive search it didn’t take me long to realize that Gavriel and Hanni Ress were the perfect couple for the job,” noted Rabbi Kurcfeld, who conducted the interview via Skype. “Gavriel is highly qualified, adept at anticipating needs, solution-oriented, and has excellent interpersonal skills.”

“Gavriel and I both knew this was where Hashem wanted us; it was pure hasgacha pratis how the Jewish network lead us to STAR-K,” says Mrs. Ress, who together with her husband left close family and friends behind in Miami Beach, after immigrating from Johannesburg, South Africa.  “We couldn’t feel more blessed with where we have ended up. Everyone involved with the 104 West! from the staff to the management–especially Paul Muscente, Associate Director of Dining, and Jason Haus, the Head Chef/Manager, and Sam Baer–have showered us with warmth and welcoming so this more than makes up for the frigid drops in temperature we will be experiencing.

“Of course, it is essential that in this whole decision, one of the most significant deciding factors was Gavriel’s interactions with Rabbi Kurcfeld,” continues Mrs. Ress. “He has not only been an incredible support to us as a family on this venture, but has become a mentor for us in more ways than just as an employer and Rabbi, and for this we couldn’t be more grateful and appreciative. Finally, it would be impossible to share our reasons for accepting this position without acknowledging the blessings of Hakadosh Baruch Hu, who in His divine plan, brought us to where we are today, Baruch Hashem.”

“STAR-K is happy to reach out to and take care of the needs of these students, offering attractive, delicious kosher meals without compromising high standards of kashrus in our commitment to uphold our mission,” concludes STAR-K President Avrom Pollak.

To discuss the feasibility of providing a kosher option on your campus, contact STAR-K: 410-484 4110.