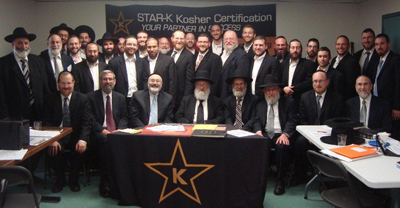 Rabbi Daniel Presman traveled 10,800 roundtrip miles, a 22-hour roundtrip flight from his hometown of Porto Alegre, Brazil, just to attend STAR-K’s ninth annual Kashrus Training Program, July 16-19, held in its Baltimore offices. Hearing about the program via an email, he was convinced that it would be well worth the trip– he was not disappointed.

Ten thousand Jews live in Rabbi Presman’s southern Brazilian community, an 18-hour car trip and 1-1/2 hour plane ride away from Sao Paula, which houses a larger Jewish population of 60,000. There, he works for Ner Le’Elef, a Jewish outreach program based in six continents and 44 countries, and does volunteer hashgacha work for Beit Din Kashrut (B.D.K.), one of the two largest kashrus organizations in Brazil.

“My community wants more kosher certified food,” explains Rabbi Presman. “Despite the differences in supervision policies between Brazilian hechsherim and those of STAR-K, I think the most important thing is learning about the practical, hands-on, on-site issues, in addition to studying the halacha. The program was very enlightening; it was wonderful to get to know the people who work at STAR-K.”

The 28 participants of STAR-K’s ninth annual Kashrus Training Program included rabbanim, kollel fellows, and others serving in klei kodesh who have studied Yorah Deah. The intensive seminar featured lectures by STAR-K’s rabbinic staff members, including its Rabbinic Administrator, HaRav Moshe Heinemann, and its President, Dr. Avrom Pollak. A STAR-K produced audio-visual production about insect recognition, a hands-on practicum for vegetable checking, and field trips to a STAR-K certified slaughterhouse, candy manufacturing plant, restaurant, bakery, the kosher kitchen of the Hyatt Regency, and optional trips to view the Pride of the Farm milk operation and Baltimore community eruv, rounded out the seminar experience.
STAR-K’s Kashrus Training Program also had the privilege of hosting Rabbi Rahamim Churba, who was recommended to participate by Rabbi Yosef Wikler, editor of Kashrus Magazine. Rabbi Churba, a member of Brooklyn, New York’s Syrian community, teaches the halachos of boser v’chalev in Shaare Torah High School for Girls, and writes halachic pamphlets for the Syrian community.

“For sure, it was worth the trip,” says Rabbi Churba. “I felt comfortable asking questions. I learned technical things, how things work. To know the ropes of hashgacha is very important; you can see kashrut in a much better light.  I thought the program was very informative and very professional. I look forward to keeping up a kesher with STAR-K, asking shailos and getting information.”

Coming to the program, from a bit closer to home, was Rabbi Moshe Walter. Last year, Rabbi Walter became the Rav of the Woodside Synagogue-Ahavas Torah, a position formerly held by Rabbi Yitzchok Breitowitz, who made aliya with his family.

STAR-K received this thank you note from Rav Walter: “Thank you again for arranging and organizing a very informative and educational program. It was very nice to see the inner workings of the organization, and the Star K’s open and honest policy when sharing important Kashrus information. I hope this will be the beginning of a longstanding relationship with the STAR-K. ”

STAR-K Kashrus Administrator, Rabbi Mayer Kurcfeld, the main presenter at the program, said: “I try to instill an attitude toward Kashrus that I believe has been lost or at least neglected. It is to stress to the attendees the need to project to all whom they might encounter in the field that Kashrus is not just about its technical demands … turning on fires, checking vegetables, meat vs. dairy, etc. There is an aspect of reverence and seriousness that Kashrus deserves. We must display that, for us, Kashrus is not some “Diet-Fad” that one can choose to forgo. It is religious-based and, as a result, cannot and will not be compromised. I believe, unfortunately, sometimes the “main ingredient” is lost — HaKadosh Baruch Hu. This is what I try to convey.”

In summing up this year’s program, Rabbi Zvi Goldberg, STAR-K Kashrus Administrator and coordinator of the seminar, said: “We are grateful that we are able to continue training the next generation of leaders in Kashrus, in the U.S. and around the world. Many of our previous attendees are making significant contributions to their communities’ Kashrus, and we fully expect this year’s group to be no different. ”