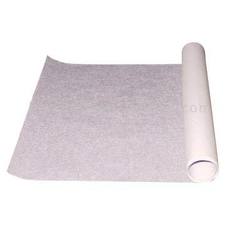 If you have ever left cookies in the oven a little too long, and they became stuck to the pan, you know what a frustrating experience it can be.  Imagine multiplying that feeling hundreds or thousands of times, and you will begin to understand one of the major problems that commercial bakeries and food producers face all the time.  To avoid this problem, food manufacturers use release agents to grease the pans.  These agents are frequently found in a spray form, like PAM, and must always be kosher certified.  Paper pan liners may also be used as release agents, particularly in bakeries.  They provide more consistent browning and baking with no added fat or calories, and require less clean-up.  Pan liners are also used by candy makers, and may be used as cupcake holders or wraps for frozen gefilte fish.  Consumers are also discovering the benefits of pan liners.  In this article, we will explore how this unique product is manufactured.  Based on Star-K’s experience in certifying paper products, we will illustrate the kashrus concerns that occur in the manufacturing process.

Paper, as we know it, debuted in China in the year 105 C.E.  A Chinese court official mixed mulberry bark, hemp, rags, and water to form a pulp which was pressed and sun-dried into a thin sheet.  Over time, this process has been refined; however, the basic concepts remain the same.  Today, paper is produced in huge plants or mills.  The largest paper machines are as long as two football fields, over 32 feet wide, and can produce enough paper every day to construct a road from Baltimore to Chicago.

To understand the process of manufacturing paper and the inherent kashrus concerns, we will travel along the line of a paper machine.

The first step in making paper in general, and pan liners in particular, is called pulping.  Pan liners begin with either pulp or a base paper called waterleaf.  Pulp consists of ground wood fiber and water.  Waterleaf is the term used in the paper industry to describe a completely untreated paper that has low resistance to water.  Some of the mills that use this paper buy it in large rolls, and through the process we will describe below, turn it into pan liners.  Mills using pulp usually buy it in large dried sheets, which they mix with water and other additives such as dyes, resins, and fillers.  Collectively, these additives are known as sizing agents. We should note that pan liners are generally made using virgin paper fibers, which do not present any kashrus issues.

Additives or sizing agents present the next kashrus issue.  Sizing agents are used to improve the quality of the paper.  Sizing comes in a variety of forms, depending on the final use of the paper.  They may be acids or bases to control pH, dry strength adhesives like starches and gums, wet strength resins, fillers, dyes or drainage aids used to help drain the water out of the pulp.

Plain paper without sizing is very absorbent.  Most newsprint, tissues and other absorbent products use this type of paper.  Products such as paper plates must be able to repel water or grease.  This is determined by the type of sizing or additives that were added to the paper at the mill.

Some sizing additives may not be kosher.  However, those added at the pulp stage are in such minute quantities that they are effectively botul, nullified.  Even so, Star-K ensures that kosher alternatives are used.

The next section of the paper machine is called the wet end, or the fourdriner, named for the Fourdriner brothers who invented it.  At this stage, the pulp mixture is pumped into the headbox of the fourdriner and sprayed onto the moving screen or wire.  The screen vibrates to help the water drain from the pulp, and the wood cellulose fibers begin to mesh into a paper web.  This web is then transferred to the couch (pronounced cooch), a belt covered with felt that carries the web to the next stage in the process, known as the dry end.

The web of fibers is then carried around the presses, which are rubber rollers that squeeze out excess water.  The web then moves on to the first dryer, which consists of large metal cans or drums that are steam heated to 200-250 degrees Fahrenheit.  The cans are stacked vertically like bricks, and the felt belt with the increasingly paper-like fiber web snakes through the maze of cans.  As they dry, the fibers can now be categorized as paper. The paper then moves to the size press, where we encounter the most critical kashrus issue.

As noted earlier, additives are mixed in during the pulping stage.  They are also applied at the size press, where the paper passes through rollers that shower on a coating which allows the paper to resist grease, water and heat.

Silicone and Quilon are the major materials used to coat the paper, each with its own advantages.  Silicone coated liners are reusable; however, they cost approximately three times more than Quilon liners.  Therefore, most bakeries use the less expensive Quilon and try to get as much use as possible from them.

Silicone, a coating derived from the mineral silica, does not present any kashrus issues.  The only kashrus concern that could arise would be the adding of the citric acid to the silicone coating, which may present a problem on Passover.  Star-K carefully monitors the use of this additive before certifying the paper for Passover.

Quilon is actually a brand name for a coating product first developed by Dupont.  Coatings of this type are commonly referred to as Quilon, even though that is a brand name.  A component used in Quilon-type coatings is stearic acid, which is typically made from tallow.  While the stearic acid component is botul in the paper, we cannot say the paper is free of kashrus problems.  Since the coating is on the paper’s surface and comes into contact with the food, a kosher stearic acid must be used.  Fortunately, vegetable based stearic acids are available.  Northern Specialty Chemicals, a company under Star-K certification, manufactures a kosher alternative to Quilon called Neccoplex.  This product has become the industry standard in kosher certified “Quilon coated” pan liners made in North America; equivalent kosher coatings are used in Europe.  Before the paper reaches the final stage, it goes through one more drying press and then on to the calender. This is where the paper passes through large heavy cast iron rollers that make the paper smooth and uniform in thickness. After this process, the finished paper is ready to be wound onto large rolls and sent to the converter.

The converter is the link in the paper chain between the mill and the consumer.  The finished paper is wound onto “parent rolls” or “mother rolls”, , which can be as much as 30 feet wide, weighing close to 25 tons.  Even when the rolls are cut down, we are still talking about a lot of paper.  That is where the converter comes in.  The converter cuts the paper into usable sizes, packages and distributes it.

Before we conclude our discussion, we must consider two other members of the pan liner family:  parchment paper and wax paper.

The terms “grease-proof pan liner paper” and “parchment paper” are often used interchangeably, even though they are not the same.  Grease-proof paper is any paper that has been coated with materials that impart to it an ability to resist grease.  Many pan liners are simply grease-proof.  GVP, or genuine vegetable parchment, is grease-proof with a kick.  This paper has the feel and look of animal parchment; hence the name parchment paper.

The process of “parchmentizing” paper begins with dipping the base paper into a bath of sulphuric acid.  The acid begins to break down the cellulose, the main component of plant fiber.  This causes the gelling of the surface of the paper fibers, which bond together and close the pores of the paper.  The process of dissolving the cellulose is stopped through a series of water baths and rinses.  The acid is completely removed and recovered for re-use.  This process produces a paper which is almost non-porous and, therefore, impervious to grease and water.  This durability makes parchment paper ideal for wrapping gefilte fish, since it does not fall apart when boiled in water.  The kashrus concerns addressed earlier regarding coatings apply to parchment paper, as well.

This popular paper can present some kashrus problems.  Most wax papers are coated with paraffin, a petroleum based wax.  However, most wax suppliers manufacture both paraffin waxes and tallow based products.  These are produced hot, often on the same equipment.  Before certifying any wax papers, the Star-K ensures that the supplier produces paraffin products exclusively, or that they have adequate systems in place to safeguard against any cross-contamination.  Therefore, when purchasing wax paper for hot use, it is wise to buy only those bearing a reliable kosher certification.

In “wrapping” up our discussion, we hope you can see how far kashrus has come in providing kosher consumers with the ability to maintain standards that were only hoped for by earlier generations.  May our steadfast adherence to these high standards be a merit for all of the Jewish people.