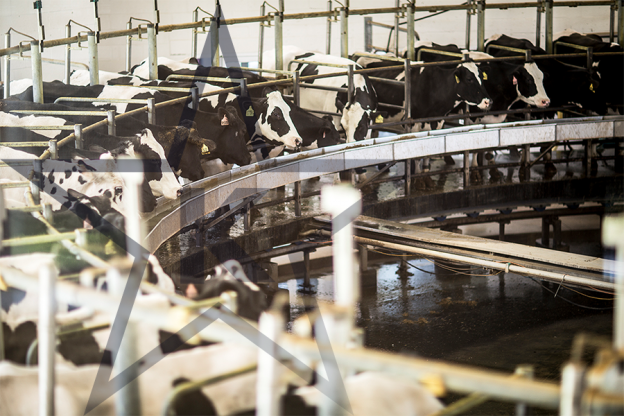 10:00 AM, 6:00 PM, 2:00 AM, 10:00 AM, 6:00 PM, 2:00 AM – a virtual ‘dairy-go-round’ on an actual carousel for 1700 satisfied participants, seven days a week, 365 days a year. This scenario bears no resemblance to my Mother’s, ע”ה, family cow that she milked in the shtetl about 90 years ago. What do both scenarios have in common? Both produce Cholov Yisroel milk but, oh, how times have changed! There is so much more that must meet the keen eye of a contemporary Cholov Yisroel mashgiach.

When I grew up in Washington, D.C., Cholov Yisroel was a totally unknown term, an unknown entity, and certainly an unknown milk bottle in the refrigerator. But times have changed. Today, Cholov Yisroel is a burgeoning industry, ranging from ice cream novelties to energy bars. However, some things never change. Whether you are milking the family cow in Sarnick or overseeing a major milking of a herd of 25,000 cows on a mega farm on the west coast, Halacha is uncompromising.

Implementing the Halacha is far more challenging and far more daunting for a mashgiach who oversees a major dairy farm operation. It requires understanding milking procedures, computer systems, inventory control, dedication, a lot of stamina and, above all, yiras Shamayim. In order to understand the responsibilities of a contemporary chaliva mashgiach, let’s take a Cholov Yisroel refresher course.

Since it was a known practice amongst farmers years ago to mix non-kosher milk with kosher milk, Chazal forbade the use of unsupervised milk. Even in a situation where adulteration was slim to far-fetched, the gezeira of our chachomim had to be upheld.

How does Halacha define supervised milk? What safeguards or, in contemporary terms, what kosher quality controls were instituted? The Cholov Yisroel criteria is two-fold: 1) the cleanliness of the keilim and 2) the presence of the mashgiach at the onset of the milking (החליבה התחלת). In the olden days, prior to the milking, a mashgiach had to make sure the keili (milk pail) was perfectly clean and he had to witness the beginning of the milking. In the event that many cows were being milked at the same time, the mashgiach had to make intermittent inspections throughout the milking session. At the completion of the milking, to ensure the integrity of the milk, the collection pail was sealed. Even if there weren’t any non-kosher animals on the farm, this standard could not be compromised. The milk that has been supervised following these protocols is called “Cholov Yisroel”.

On a modern dairy farm, the milk pail has been replaced with pumps, lines, hoses and chillers leading into large holding tanks. Furthermore, the logistics of maintaining Cholov Yisroel on large dairy operations with thousands of cattle requires meticulous oversight and record keeping.
In many cases, the bottling facility and the milking parlor are designated to the same location. The milk is then transported from the milking parlor to a bottling facility. It is the mashgiach’s duty to ensure that the tanker is clean and has been properly sealed with the mashgiach’s personal chasima (seal) during transport to the bottling facility, where another mashgiach receives the Cholov Yisroel milk tanker for further processing.

When a dairy tanker arrives at the bottling facility, the mashgiach must be present for the offloading. Milk is offloaded to a holding tank dedicated to Cholov Yisroel. Obviously, the kosher cleanliness has to be approved by the mashgiach, and the port of the holding tank must be sealed with the mashgiach’s kosher seals.

Prior to bottling, the raw milk has to travel through a complex network of pasteurization, separation and homogenization. The raw milk is separated into skim milk and fresh cream, which are stored in dedicated holding tanks. Fluid milk is bottled in a sequence: Skim milk, 1%, 2% and Whole. The appropriate percentage of cream is added back into the milk to create the various varieties of fluid milk. The remaining cream is used to make heavy cream, or ice cream or whipping cream and can also be churned into butter. In addition, a dairy can produce chocolate and flavored milks, buttermilk, liquid yogurt shakes, yogurt, and sour cream as well as juices and drinks.

Therefore, a contemporary Cholov Yisroel mashgiach has to be a heads-up supervisor as well as a skilled quality control manager. In a labyrinth of pipes and holding tanks, a mashgiach must have a clear picture of the kosher lay of the land. The mashgiach must also be skilled in ingredient recognition of stabilizers, emulsifiers, flavors and cultures. Not only do these ingredients have to be kosher, they also have to be Cholov Yisroel or Cholov Yisroel-compatible. There is much more to bottled milk than meets the eye.

A typical bottling facility is not a 9 to 5 operation; bottling conceivably takes place at all hours of the day. What safeguards have been implemented assuring that a mashgiach is present at the beginning of the Cholov Yisroel bottling? Years ago, my dear chaver, Rabbi Mordechai Ungar, hit on a great idea. Milk used to be sold in paper containers. The ‘Sell By’ date was manually stamped on the gable at the top of the carton. Rabbi Ungar’s suggestion for kosher quality control was the addition of Hebrew characters into the ‘Sell By’ block of letters and numbers. The Hebrew characters represented the Hebrew date that corresponded to the ‘Sell By’ date. These characters were in the possession of the mashgiach, who placed simanim next to the “Sell By” date. This ingenious siman assured that the bottling was supervised by the mashgiach and has stood the test of time.

Maintaining The Kosher Integrity of the Herd

Approximately 25 years ago, a serious revelation that affected the entire dairy industry was brought to the fore concerning a condition that occasionally occurs in certain dairy cows on a dairy farm. At times, due to poor diet, a cow’s stomach can produce gas and twist and dislodge which creates a blockage of the intestinal tract. If left alone and not rectified, the cow will die. This displacement condition is known as a ‘Displaced Abomasum’ or, simply put, a D.A. What are the halachic implications of corrective surgery? In order to understand the problems associated with corrective surgery, let’s take a short lesson in kosher anatomy.

Parshas Shemini clearly defines the kosher criteria for a cow. The cow must have a split cloven hoof שסעת שסע)) and chew its cud (מעלת גרא). A species that chews its cud is known as a ruminant. We have been taught that a cow has four stomachs. The cow’s stomach is actually divided into four parts: the rumen (כרס), the reticulum (בית הכוסות), the omasum (המסס), and the abomasum (קיבה). The food enters the כרס (rumen) from the ושט (esophagus) and exits the קיבה (abomasum) into the small intestine (דקין). In the event that a cow develops a digestive blockage, the bloat can twist the קיבה (abomasum) and displace it. The cow will then require medical treatment to correct the displacement.

Although the cow has been saved and recovers quite quickly, becoming a great milker, the הבקיה תביקנ (a puncture in the קיבה or safek in the הבקיה תביקנ), albeit healed, is viewed by Cholov Yisroel certifiers as a s’fek treifa and the cow is disqualified for milk production.

If the D.A. cow remains in the herd, tracking it is a daunting task for the mashgiach. Systems have to be set up along with special tagging and separate milking to isolate these cows so that they do not comingle with the rest of the herd. Cholov Yisroel productions supervise separate D.A. milking. Moreover, when a farm wants to qualify for Cholov Yisroel production the mashgiach has to delve into the history of each cow to assure that no post-operative D.A. cow has been integrated into the herd. Other kosher certifications do not want to risk D.A. comingling. To that end, any cow that has been diagnosed with a D.A. (when milk production drops) is immediately sold and taken off the farm. It is STAR-K’s policy at Pride of the Farm to sell any cow diagnosed with a D.A. and to remove the cow from the herd, ensuring there is no inadvertent comingling at the chaliva. All cows in the Pride of the Farm herd have been birthed and raised on the premises, allowing for meticulous record keeping and assurance that no D.A. cow has been integrated into the herd.

We live in an age of transparency, accountability and instant messaging. It has been a longstanding minhag for the mashgiach to call the rabbonim prior to התחלת החליבה – the start of the milking. However, yesterday’s calls from the ‘breakroom’ telephone have given way to cell phone pictures, texting, and timeclock apps with GPS positioning so there is real-time accountability and verification that the mashgiach is present at all times.

Indeed, times have changed from milking the family cow in Sarnick. Undoubtedly, today’s chaliva mashgiach is the ultimate pride of the farm.