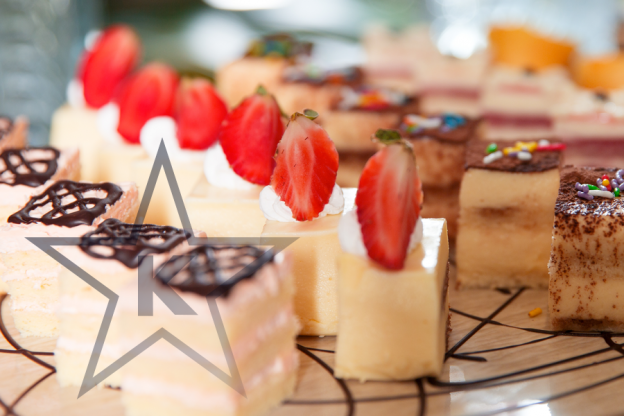 You are at a חתונה and all of a sudden they roll in the Viennese tables full of cakes, chocolates, ice cream, melons and bread. You are not sure whether or not you should recite a ברכה ראשונה over any of these desserts. The question is equally applicable in your own home whether on Shabbos or any given day of the week: Do I or don’t I need to recite a ברכה over dessert?

The Shulchan Aruch1 states that when one eats bread, all foods which are eaten together with the bread are פטור (exempt) from a ברכה because they are secondary to the bread. Therefore, the ברכה recited over the bread covers any other food that is eaten, as well.

On the other hand, since a dessert is eaten to end the meal with a sweet taste, it is entirely different since the intention is not to eat it as an accompaniment to the bread. Consequently, anything eaten as a dessert should require a ברכה ראשונה .

There are exceptions to this rule. One exception is that most cakes may be considered to be פת (bread). This is because the exact classification of bread is a מחלוקת (dispute).2 If one recited a ברכה over bread at the beginning of the meal, and the cake is considered to be a form of bread, then we don’t recite another ברכה . The reason is ספק ברכה להקהל, which means that when there is a doubt as to whether or not a ברכה was recited, we do not say Hashem’s name again in vain. Based upon the above הלכה, in most cases a ברכה is not recited over dessert.

Some people err and think that a ברכה of מזונות should never be recited over dessert. According to the above noted הלכה, only מזונות items which might be considered to be bread should be exempt from a ברכה . However, any מזונות item which is clearly not considered to be bread should require a ברכה . Examples of this include Rice Crispy Treats, chocolate oat balls and a sweet pasta dessert.

Regarding compote (a sweet cooked fruit sauce), a ברכה should be recited when eaten as a dessert.3 However, there is evidence that the Chofetz Chaim refrained from reciting a ברכה over compote at the end of a meal. The reasoning for this is not clear, however, he did not retract what he wrote in his Hilchos Brachos. The opinion of many poskim, including HaRav Moshe Heinemann, shlit”a, is to recite a העץ over compote like all fresh fruits.

The ברכה of שהכל should be recited over all candy and items which would normally require this ברכה .