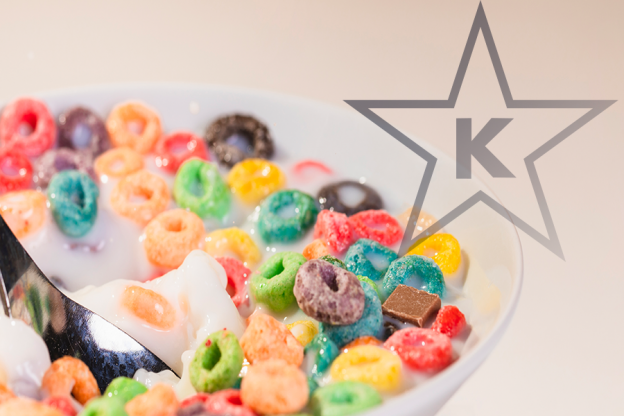 STAR-K has researched breakfast cereals for the past 30 years and has published Brachos lists and halachic guidelines for these products based on the psak of Rabbi Moshe Heinemann, shlita, STAR-K Rabbinic Administrator. It is with great pride that STAR-K has begun certification of the following three cereals distributed by Nestle in Israel: Cheerios, Fitness, and Crunch Cereals. The hashgacha is coordinated by our newly expanded Israel office. The products bear a STAR-K symbol and are pareve, bishul Yisroel, and yoshon. The brocha rishona on all three cereals is mezonos and the brocha achrona is al hamichya.

Special halachic status has been given to products coming from chameishes minei dagan, the five special grains: wheat, spelt, barley, oats, and rye.1 When these grains are ground up, mixed with water and baked into cake, cookies, crackers and other pas haba’ah b’kisnin products the brocha is Mezonos and the brocha achrona is Al Hamichya. If one is koveya seudah (eats enough to constitute a meal), the brocha is Hamotzi and one must recite Birchas Hamazon.2 One of the definitions of pas haba’ah b’kisnin is that the dough is baked into a hardened crispy product. Products such as pretzels and Post Grape Nuts cereal3 are included in this category of pas haba’ah b’kisnin, and their brocha is Mezonos. The brocha on Cheerios4 and Wheaties cereals is also Mezonos, and the brocha achrona is Al Hamichya.

In the above cases, the chameishes minei dagan is broken down. However, if the grains remain whole and are simply roasted, they are no different from any other variety of produce which grows from the ground (e.g., corn), and the brocha is Hoadama.5 What this means is as follows: The brocha on unprocessed and slightly processed (e.g., toasted whole) wheat or oats is Hoadama. The brocha on fully processed wheat and oats (e.g., flour and water that are cooked or baked) is Mezonos.6

Wheat has four parts— endosperm, bran, germ and the inedible husk. Endosperm makes up the majority of the kernel and is the primary source of flour, bread and cake. If the whole wheat is puffed (i.e., the bran is not removed), the brocha remains Hoadama. An example of this is Kashi 7 Whole Grain Puffs,7 a cereal which includes chameishes minei dagan, with all its bran.

The process for most other puffed wheat is to first remove bran from the kernel through a process known as pearling. Some endosperm may be incidentally removed. The kernel is then placed into a pressurized heated chamber and steamed. The moisture spurts out of the kernel, thereby “popping” it.

There are different opinions8 as to which brocha is recited. Some opinions say this is processed enough to become Mezonos.9 Others are of the opinion that regular puffed wheat is not processed enough, and the brocha is Hoadama. In order for the brachos to be Mezonos, the product must be a “maaseh kedeira”, similar to a bowl of oatmeal in which the grains stick together.10

L’halacha, puffed wheat should ideally be eaten in the middle of a bread meal. Otherwise, Rav Moshe Feinstein, zt”l,11 says one can recite either Mezonos or Hoadama. Rav Moshe also says the brocha achrona on puffed wheat is Borei Nefashos.12 This halacha also applies to Kellogg’s Honey Smacks and Post Golden Crisp.13 The brocha rishona on wheat cakes is Mezonos and the bracha achrona is Al Hamichya, due to the process which makes it a maaseh kdeira.14

Wheat germ is the “embryo” of the kernel.  It is heated to deactivate enzymes which would allow sprouting. It is generally eaten with other foods and would usually be tafel, secondary to the other ingredients in the product.  If one eats wheat germ by itself the brocha is Hoadama since it is not processed enough and the heating is only applied to deactivate the enzymes, not to cook the germ.15 The brocha on bran is Shehakol.16 Therefore, the brocha on Kellogg’s All Bran cereal is Shehakol, and the brocha achrona is Borei Nefashos.17

The brocha on produce that grows from the ground is Borei P’ri Hoadama. However, if the produce is ground into flour (i.e., it is no longer recognizable) and is not from the five special types of grain or rice, the brocha becomes Shehakol.18 Therefore, the brocha on corn chips (made from corn flour) and cake made from potato starch is Shehakol.  The brocha achrona on all non-chameishes minei dagan products is Borei Nefashos.

Rav Moshe Feinstein, zt’l, explains19 if the grain has not been ground into flour, but only popped (e.g., popcorn) or rolled into a flake, it retains its Hoadama status. Kellogg’s Corn Flakes and Frosted Flakes cereal are made from recognizable corn pieces (called grits) that are not ground into flour, so the brocha is Hoadama.  However, Kemach Brand Corn Flakes is made from corn flour; so, its brocha is Shehakol.  The same is true regarding Corn Chex; so, the brocha is Shehakol.20

Rice is unique, as its brocha is Mezonos and its brocha achrona is Borei Nefashos.22  This includes processed rice products, such as Kellogg’s Rice Krispies and Post Fruity Pebbles. It also includes products whose primary ingredient is rice flour.

In general, when there is a mixture of foods with different brochos, one determines the main purpose for eating this food and recites the brocha of that ingredient. This ingredient is known as the ikkur. For example, if one eats a salad with dressing only a Hoadama is recited.

The guidelines are as follows: If the chameishes minei dagan Mezonos ingredient is added l’taam, as an integral part of the cereal or for its own flavor, even though it is second or third in the ingredient list, the brocha is Mezonos.24  Examples of this include Kellogg’s Apple Jacks and Froot Loops.  Similarly, the brocha on Raisin Bran cereal is Mezonos, as the endosperm in the flakes is the ikkur ingredient.

However, if the chameishes minei dagan is only l’davek — a binding agent for texture or consistency, or a flavoring component to enhance the primary corn ingredient, the brocha is Shehakol. An example of this is Quaker Cap’n Crunch cereal.  In this corn cereal, the oat flour is added only as a binding agent.25

This halacha is very relevant to various cereals, as several list corn flour as a first ingredient and chameishes minei dagan, such as oat flour and wheat flour, as a second or third ingredient. Unfortunately, there is no way to tell from the label if the oat or wheat flour is is added l’taam or l’davek.26 When there is doubt as to whether the oat flour listed as a secondary ingredient is l’taam or l’davek, contact the kashrus certification agency. If this is not possible, one should recite Shehakol and Borei Nefashos.27

Kellogg’s Crispix is processed so that each piece is approximately half rice and half corn. Rav Moshe Heinemann, shlita, visited the Kellogg’s plant and conducted a thorough review of all the raw materials and production areas. Since it has no ikkur or tafel and no chameishes minei dagan component, two brochos are required.  When eating this cereal, one Crispix should be split; Mezonos is recited and then one eats from the darker rice side, then Hoadama is recited on the lighter corn half and is eaten.28 Alternatively recite a Mezonos and Hoadama on other items.

Undoubtedly, as companies continue to re-formulate cereals for better taste and more nutrition, one should not be surprised to discover that the brocha on one’s favorite cereal has changed. In the z’chus of beginning the day with reciting the correct brochos on cereals, may Klal Yisroel be zoche to much brocha v’hatzlacha bestowed upon us from Shamayim.