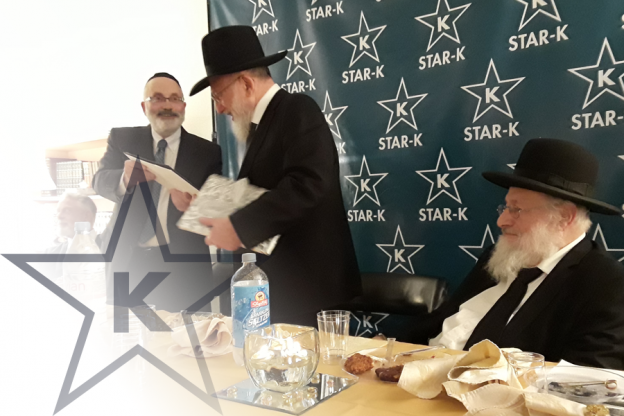 With his inimitable sense of humor, STAR-K Director of Supervision Rabbi Eliyahu Shuman opened his speech joking that it was hashgacha that his seudas preida was being held on Parshas Beshalach. After the laughter diminished, he explained why the decision to retire was so difficult for him.

“For 42 years, I was zoche to work with Rav Heinemann, be in the daled amos of the Rav, and be able to be misabek b’afar raglov; that’s not something you want to retire from.” explained Rabbi Shuman. “It’s also hard because we’re not an organization—we’re family. In these 42 years, we’ve become a unit and we work so beautifully together. It is like a wheel with the Rav in the center, and all of us are the spokes trying to be mekayam the requirements and the divrei haRav. When you’re family, it’s hard to leave.”

In closing, Rabbi Shuman shared, “I want to devote more time to learning and go back to the Beis Medrash, but I hope to continue my shaychus with the STAR-K. I am family, and you don’t go away from family.”

After commenting that it was a dual purpose “Goodbye Rabbi Shuman, Hello Rabbi Miller” party, Rabbi Shuman officially welcomed his successor, Rabbi Nisson Dov Miller. Rabbi Miller relocated with his family from Sharon, Massachusetts, where he served as the Rav of Congregation Etz Chaim for over 20 years. Rabbi Miller joined the agency after Tisha B’Av.

“Boruch Hashem, we’re very happy that Rabbi Miller is to be my m’maleh makom. He’s an adam chashuv, a chochom, a baal midos, and a chochom lev,” said Rabbi Shuman.

Dubbing Rabbi Shuman the “Punavitcher Rav”, because of his propensity for punning, Dr. Pollak shared some divrei Torah and remarked, “Personally, I’ve learned a lot from Rabbi Shuman; he’s a great anav. And, we have great hakaras hatov to him as the first hired rabbinic coordinator for being very involved in laying the groundwork for what all of us here today are able to accomplish.”

STAR-K Rabbinic Administrator HaRav Moshe Heinemann added, “When he started we were very small, and Boruch Hashem we have expanded with siyata d’shmaya, and we have seen unbelievable siyata d’shmaya with Rabbi Shuman. He helped us by setting up [the STAR-K] and paving the way, and we owe him a tremendous yasher koach.”