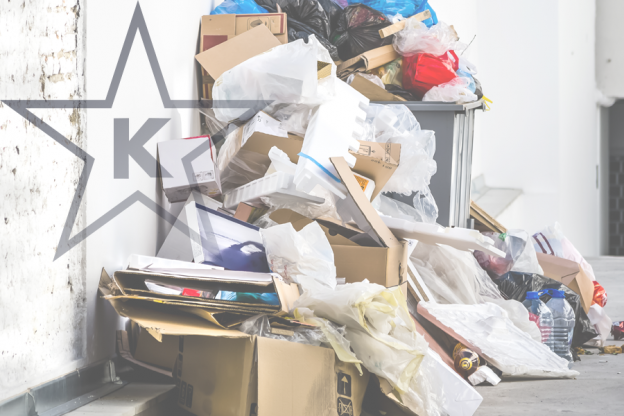 Shockingly, the Natural Resources Defense Council reports that about 40% of all food in the United States goes uneaten; it is either left to rot or tossed in the garbage. In fact, 7% of all food doesn’t even make it out of the farm, and a significant amount doesn’t even get picked because it doesn’t meet standards for color and shape! One industry estimate claims that an average of $2,300 of food products are discarded each day by individual grocery stores due to impending expiration dates. American families throw out between 14-25% of the food and the beverages that they purchase, and restaurant diners leave about 17% of their food uneaten.1

Of course, we know the Torah teaches us that we need to be careful and not wasteful. We also know that we are not just talking about wasting food. We are charged to appreciate every chair, book and bobby pin with which Hashem has kindly gifted us.

The Gemora2 explains the posuk regarding Dovid Hamelech towards the end of his life, “Vay’chasuhu bivgadim v’lo yeicham lo” – “They covered him with clothes, but he wasn’t warmed by them.” Approximately 40 years earlier, before he was recognized as king, Dovid Hamelech was hiding from Shaul Hamelech who was trying to kill him. Stealthfully, he approached Shaul Hamelech. Instead of killing Shaul, Dovid Hamelech cut off the corner of Shaul’s coat. Subsequently, he used that corner as proof that he could have killed Shaul had he been so inclined. Thus, he urged Shaul to make peace with him.

Despite the seemingly harmless cutting of Shaul’s coat, the Gemora tells us that since Dovid did not treat Shaul’s coat with the respect it deserved, measure for measure, many years later Dovid Hamelech’s garments did not offer him their warmth.
As the Shulchan Aruch HaRav3 states, “Just like a person must be careful with his body not to cause it to perish, deteriorate or be harmed, so must a person be careful with his assets not to cause them to deteriorate or be harmed. Anyone who breaks utensils, tears clothes, destroys a building, seals a spring, ruins food/drink or causes them to become repulsive, or ruins anything that is fit for the benefit of man violates a negative commandment. As the posuk in Parshas Shoftim relates, “When you lay siege to a city for many days, do not destroy the fruit trees there ….” If the Torah wanted us to be careful with the fruit trees of our enemies, certainly we should be careful with assets that are hefker or belong to our own people. Thus, we see that the Torah is sensitizing us to appreciate each physical and spiritual gift that Hashem has bestowed upon us and encouraging us to use them constructively.

The Chinuch4 outlines the idea behind this mitzvah as we refer to it, “Bal Tashchis”. He explains that the mitzvah of bal tashchis, which is based on the mitzvah not to cut down a fruit-bearing tree (as previously mentioned), is rooted in the idea that we should sensitize ourselves to love that which is good and beneficial to us. When we do this, measure for measure, ‘good will cleave to us and misfortune and destruction will be distant from us. This is the practice of the pious and meticulous who love peace, rejoice in what is good for people and bring them close to the Torah. They will not squander even a mustard seed. They will be troubled by waste and senseless destruction. If they are able to save something from being senselessly wasted, they will muster the effort.’

We derive the general parameters of the halachos of bal tashchis in everyday life from the halachos pertaining to cutting down a fruit-bearing tree. In order for this prohibition to apply, the tree has to be beneficial to us. The Gemora5 quotes Rav, “A tree that bears a kav is forbidden to be cut down. As the verse says, ‘Only a tree that you know is not a food tree – that tree you may destroy and cut down and build bulwarks against the city that makes war with you …’ ” The Gemora notes the phrase ‘eitz ma’achal’ (a food tree) is used instead of an ‘eitz pri’ (a fruit tree). According to Rav, the posuk implies that the prohibition applies only if a ma’achal, a significant amount of fruit, grows annually. The Poskim also understand that even if the tree bears fewer fruits annually, but currently bears edible fruits that have grown at least one-third of their full growth, the tree cannot be cut until the fruits have been consumed.6

EXCEPTIONS TO THE RULE

At the same time, the basic halacha allows for cutting down any fruit tree if we need its place7 for a significant need,8 such as a mitzvah (e.g., mikvah)9 or if the owner would benefit more by selling its wood than its fruit.10 Additionally, a tree that causes damage can be cut down.11 In these cases, it is preferable to cut a branch instead of the whole tree.12

Many commentaries understand that despite the sanction to cut down a fruit tree in these circumstances, we should not cut it down ourselves. After all, R’ Chanina13 tells us that his son passed away as a result of cutting down a fruit tree that was still bearing fruit. For this reason, the minhag is to sell the branch or tree to a non-Jew and allow the non-Jew to cut the branch or tree – even in circumstances where we have a clear-cut heter (approval) to cut down the tree.14

Similarly, the Poskim inform us that bal tashchis applies to our other possessions, as well. We are mandated to make sure that we do not waste the items with which Hashem has bentched us. The Rambam15 states, “Anyone who breaks utensils, tears garments, destroys buildings, stops up a spring, or ruins food with a destructive intent transgresses the command, ‘Do not destroy.’ ” However, he is not lashed. Instead, he receives stripes for rebellious conduct as instituted by the Sages. Furthermore, the Poskim mention that misusing an item and causing it to break or wear out in an untimely manner16 or in anger violates this prohibition.17

Since the posuk focuses on destructive intent, “l’hashchis”, we can infer that when the purpose of the act is constructive it is permitted. Thus, the Mishna18 relates that the manager of the Har Habayis would walk around the area and observe the Kohanim and Leviim who were the honor guards for the Beis Hamikdash. If it was apparent that a guard was sleeping on duty, the manager would hit the guard with his stick. If the manager felt that the discipline needed to be more dramatic, then he even had permission to set fire to the clothes of the sleeping guard. This would not qualify as bal tashchis, since it is for a constructive purpose i.e., ensuring the proper conduct of a guard in the Beis Hamikdash.

For this very reason, at a wedding we break a plate at the Tana’im and a glass under the Chuppah19 l’zeicher l’churban. Additionally, the Gemora20 relates that Mar son of Ravina made a wedding for his son. When he saw that the rabbis were too joyful, he broke an expensive glass to affect the mood and increase the level of yiras Shamayim.

Another situation where there is no problem of bal tashchis is concerning a hiddur mitzvah. Therefore, we can exchange an old kosher mezuza for a more mehudar one or an old yeri’ah of sefer Torah for a new one.21 Even if we can’t give away an older sefer and must designate it for shamos, it is not considered to be wasteful to buy a new edition of a sefer at the expense of no longer using the older one.22

Thus, we see that although there are many times when we are faced with situations of waste, we are urged by the Torah to cherish every item that Hashem has bestowed upon us and not to discount its importance.

As we learned in Parshas Vayishlach, when Yaakov Avinu traveled back home after being away for over 20 years, he helped his family pass over the Yabok River. The posuk23 relates that after Yaakov helped carry all the animals and movables across the river, he returned alone to the eastern side of the river. Chazal teach us that Yaakov returned alone to retrieve a number of small jugs. These jugs might have seemed unimportant and trivial to many, however, Yaakov Avinu lived this mantra: Every item that Hashem has given us is a blessing. No matter what the size, we need to treasure them as Heavenly gifts and use them accordingly.