Toloyim – the name strikes fear in the hearts of the G-d fearing balabusta.  It seems that toloyim abound in the supermarket produce section in romaine lettuce, broccoli florets, fresh dill, cilantro, strawberries, and raspberries; the list is seemingly endless.  From nuts to flour and from pasta to raisins, kinim in Mitzrayim seems to pale in comparison to what the kosher consumers are confronting today.  The presence of insects in leafy greens, fruits, grains, and flour is nothing new.  In fact, there is a complete section in Shulchan Aruch dedicated exclusively to the halachos of parasites found in produce and other food items a/k/a Hilchos Toloyim.1

It is remarkable that Shlomo Hamelech’s wise statement, אין כל חדש תחת השמש,2 “there is nothing new under the sun,” comes to life when one reads about the Shulchan Aruch’s treatment of insect infestation.  Copepods, flour beetles, thrips, aphids, flies and worms are all discussed and analyzed, as well as the parameters of the prevalence of infestation and techniques for insect checking.

What is an amazing true halachic fact is that not all toloyim are created equal.  There are criteria that have to be met in order for a parasite to be deemed forbidden.  In circumstances where a parasite grows in the flesh of its host and does not see the light of day, the fish with the worm in its flesh would be muttar (permitted).  If the parasite was found in the host’s intestine, that parasite would be assur (forbidden).

Recently, an age-old question resurfaced regarding a very active marine fish parasite that can find its way into many hosts during its active life cycle, including human beings!  The parasite in question is a round worm called Anisakis.  The anisakis is a parasitic nematode, meaning a round worm that lives in or off a host fish.  The origins of the anisakis are fascinating and tumultuous.

Throughout the life cycle of an anisakis, it can literally “worm” its way into many different types of sea creatures and fish (see chart #4, #5, #6).  The anisakis can also infect a human through the eating of raw fish (see chart #7) that contains an anisakis buried in its flesh (one of the pitfalls of eating sushi, and a real concern of the FDA).  Among the kosher fish that can host the anisakis are wild salmon, halibut, sea bass and scrod.

According to the literal explanation of the Shulchan Aruch, if a parasite that is microscopic in size3 finds its way into the host’s flesh and begins to grow, the halacha states that those toloyim would be permitted based on the principle of מינה גבלי or
דמיניה קא גדלי ,4 it grew from the host.  If the nematode was found in the intestine, it would be forbidden because of מעלמא קאתו ,5 “it came from the outside.”  This means that if the parasitic worm migrated from the ocean and was visible prior to being swallowed by its first host (i.e. a crustacean such as a krill, see chart #4), and then entered an intermediate host (e.g. halibut or salmon, see chart #5), then the parasite is forbidden because the worm has previously had the status of a שרץ המים , “a crawling marine creature.”

However, with the advent of scientific research, there are poskim who question if this heter applies with regard to the anisakis.  There has been concrete scientific evidence attesting to the fact that the anisakis is over 0.4mm in size when swallowed by the krill.  When the krill is then swallowed by a kosher host fish, the krill is digested and the parasite remains intact in the viscera (intestines of the fish).  If the fish is caught and is not gutted immediately, the worm can and does migrate and penetrate into the flesh of the fish.  This means that the anisakis, which has already taken on the status of a שרץ המים , even though it was spotted in the flesh of the salmon and was assumed to be permitted, would in fact be forbidden.

The anisakis question is not new but has recently caused quite a stir in the halachic community.  The gedolei haposkim in Eretz Yisroel, Rav Eliyashiv shlit”a; Rav Wozner, shlit”a; Rav Nisin Karelitz shlit”a; Rav Chaim Kanievsky shlit”a; and Rav Moshe Sternbuch shlit”a among others, have all forbidden fish that may possibly contain the presence of the anisakis.  They feel that the fish is forbidden min HaTorah, unless it has been checked.

Practically speaking, how will this controversy be resolved?  This is a question of an
אסור דאורייתא .  I believe that just as kashrus has been vigilant regarding b’dikas toloyim on land, so too it will be vigilant in the sea.  Kosher fish market mashgichim will be trained to spot worms on a lightbox or under ultraviolet light.  Kashrus will be more alert and attentive in supervising the immediate gutting of the fish at the catch before canning, in order to effect a precipitous reduction in this problem.

It is interesting to note that Rav Moshe Feinstein zt”l was queried regarding this issue    35 years ago.  Rav Moshe said unequivocally that checking the fish is not necessary.  Upon hearing the response, Rav Moshe was asked if he could write this in a Teshuva, response.  Rav Moshe replied that he didn’t want to commit this to writing because, “If I do, people might think there is a question.  There is no question.  No checking is required.”  But, Rav Dovid Feinstein shlit”a said that we have to analyze the contemporary facts.  When the shaila was raised 35 years ago, it was not known at that time that the anisakis migrated from the viscera to the flesh.

Responsible kashrus has and will be in a constant state of tikun, improvement, as our knowledge of the food industry has grown.  To that end, we have identified the latest kashrus issues and implemented a system of checks and balances to deal with and resolve these new challenges, the most recent of which is the anisakis.

One should not lose perspective regarding recent updates in kashrus standards, when done so with the proper motivation.  Our intent has never been to harm the kosher consumer, but rather to educate and save him from spiritual harm. 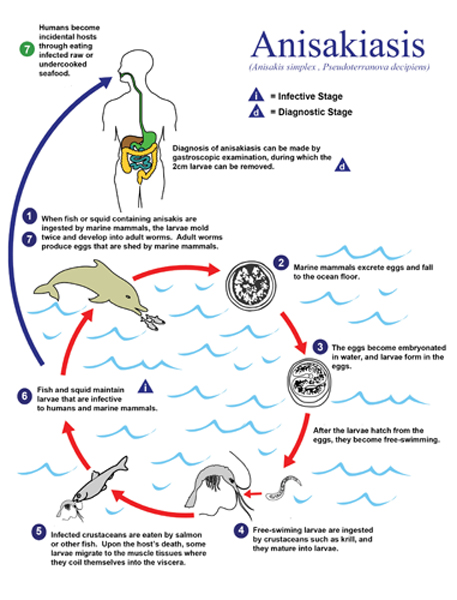