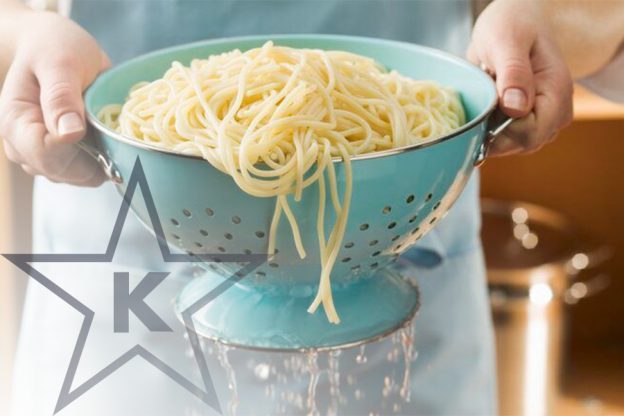 You have arrived home after a long day at work. Upon entering your house, you notice a full strainer of macaroni sitting next to a fleishig pot. You are not sure if you can use that macaroni to make yourself macaroni and cheese. Everyone knows that cooking milk and meat is an issur d’oraisa,1 but this is pareve macaroni from a clean fleishig pot. What is the halacha?

The Gemara tells us that just as one may not cook actual meat with cheese, he may also not cook meat flavored food with cheese2 (i.e., meat flavored potato from a cholent pot). Even a flavor which was transferred twice cannot be cooked with the opposite gender food, e.g., flavor which transferred from meat to a pot and then from that same pot to the macaroni. When the transmission of flavor is performed through a cooking process, we maintain the view of the Rama who states that the cooking process removes all ta’am from the pot, and the meat flavor which has entered the macaroni is still forbidden to be mixed with cheese.3 If this is so, then it would be prohibited to cook the macaroni with cheese. (If one did accidentally cook the macaroni with cheese, it is usually permitted).4

All of the above is true only if the meat pot had been used to cook meat within 24 hours. However, if the meat pot had not been used within 24 hours, and the pot was clean, then the Rama rules differently. He states that it would be permissible for one to cook the macaroni together with the cheese because all of the meat flavor in the macaroni is l’pagum – giving only an undesirable flavor.5

Another question which is commonly asked is whether or not one may cook eggs, macaroni, etc. in a meat pot which was not used within 24 hours with the intention of cooking them with the opposite gender of food, i.e., cooking eggs in a dairy pot which had not been used for 24 hours for the purpose of eating them with liver on Shabbos. The opinion of Rav Moshe Heinemann, shlit”a, is that it is not permitted.7 That which was previously written about allowing macaroni to be cooked in a meat pot that had not been used for 24 hours is true only when the macaroni was cooked to be eaten as a pareve meal or with meat. In that case, one may mix the macaroni with cheese.

One last point that should be addressed is whether or not one would be required to wait 6 hours after eating potatoes or pasta that was cooked in a fleishig pot. The answer is no.8 A common application of this is found in foods that are prepared in a fast food restaurant, where a food label states, “Made With Meat Utensils”. This is due to the fact that the pots are usually clean. (However, if the pots are not clean you are required to ask a shayla).9