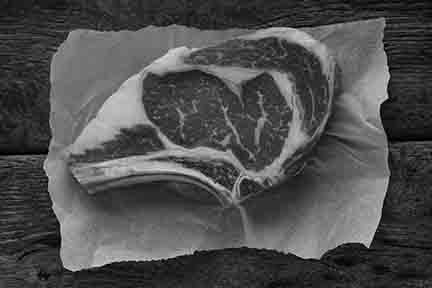 It is written in our Torah, “Ubosor basodeh treifa lo socheilu” (Shmos 22:30), it is forbidden to eat treif meat.  While the expression “treif” (non-kosher) has become the universal connotation for food that is not kosher, in truth, the word treif specifically refers to an animal whose flesh was torn or ripped.  Technically speaking, if a kosher species of animal or fowl was attacked by a predator, the meat of the victim may be deemed treif.  However, the meat of an animal improperly kosher slaughtered is not treifah, it is called a neveila.  Technically, meat of a non-kosher animal species is the meat of a temeiah.  Yet, the term “treif” has found its way through the portals of the slaughterhouse, as well as the aisles of the non-kosher meat section of the supermarkets.  No matter what the name, all of these categories of meat are forbidden to be eaten.
The halacha requires that all animals and fowl used for kosher consumption be of a kosher species and slaughtered by a shochet.  Once shechted, the freshly slaughtered animal or fowl must undergo a series of inspections (bedikos), assuring the health and wholesomeness of the animal.  If the animal was found to have suffered an internal defect such as a rip, puncture, or broken bone, or if the animal appeared to be suffering from an illness or defect that was determined to be terminal had the animal lived, the animal would more than likely be treif.
While some treif characteristics may be determined by external examination, an animal or fowl cannot be kosher approved before being examined internally.  The internal examination determines that the internal organs are free from any holes, punctures, defects, or disease that would disqualify the animal and render it non-kosher.
During the internal examination (bedikas p’nim), it is especially common to find adhesions (sirchos) on the animal’s lungs.  An adhesion is an abnormal condition in which body tissues are united by fibrous tissues.  These adhesions may be indicative of a puncture in the lung wall underneath the adhesion.  A puncture of the lung will disqualify an animal and render it treif.  However, at times the adhesion on the lung is not hiding a puncture.  This can be determined through careful, skillful removal of the adhesion.  Once removed, the adhesionless lung can be tested by blowing it up with air and submerging the lung under water.  If air bubbles appear in the water, it is an indication that the lung has been punctured and the animal is treif.  If the submerged lung is airtight, the animal is kosher but not Glatt kosher.

What Is the Difference Between kosher, Glatt and Beis Yosef Glatt?
It is important to understand the different standards of kosher meat.  Just as the meat industry maintains the quality of its meat through its grading i.e., prime or choice, so too the world of kashrus maintains different standards.  If the lung was found to be free of adhesions after the shochet’s bedikos, the animal is deemed to be Beis Yosef Glatt kosher.  Beis Yosef Glatt typically means that there were no adhesions to the lungs at all.  Glatt kosher means that any adhesions found were exceptionally thin (like a sewing thread) and the adhesion peeled off easily, leaving no hole in the lung wall, and the adhesionless lung passed the air/water test.  Kosher means that the lung had adhesions which were thicker or wider in nature; however, upon removal they did not leave any hole in the lung wall and the lung passed the air/water test. Generally speaking, it was the custom of Ashkenazic Jews of European descent to eat both Beis Yosef Glatt and non-Glatt meats, and to accept both as kosher.  [Please note that Beis Yosef Glatt meat that is certified only by Sephardic hechsherim may rely on leniencies that are not acceptable to Ashkenazim.]
The Glatt criteria applies to the meat of gassos, adult cattle i.e., beef.  This list includes the meat of steer, heifers, bulls, cows and buffalo.  Therefore, a butcher could legitimately advertise Glatt kosher rib steaks and kosher rib steaks.  However, deer, sheep, lambs, calves, and all fowl (chickens, turkeys, and ducks) always have to be Beis Yosef Glatt to be considered kosher.  This means that adhesions are not removed from calf lungs, as such defects would render the calf treif.
Sometimes suppliers or proprietors will advertise Glatt kosher chickens to promote their product.  This implies that the “Glatt” chicken is of higher kosher quality than “regular” kosher chicken, and that a chicken could be kosher without being Glatt.  This is a myth, since every chicken in the United States must be Beis Yosef Glatt in order to be considered kosher.  In Israel, the lungs of the chickens are checked due to the prevalence of Newcastle Disease.  Indeed, there are two types of chicken that are sold in Israel – Mehadrin and non-Mehadrin.  Mehadrin chickens, whose lungs are checked, are considered Beis Yosef Glatt while the non-Mehadrin chickens would be considered only regular non-Glatt.
Today, the baseline certifying standard of kashrus organizations for meat is Glatt Kosher.  It can be reasonably stated that today’s kosher consumer is caught up in a Glatt kosher versus Beis Yosef Glatt kosher frenzy.  Meat purveyors, suppliers and manufacturers are the first ones to capitalize on this growing phenomenon.  The problem is that there is now a marked shortage of true Beis Yosef Glatt and regular Glatt kosher meat.  Sometimes only 1 in 20 animals will be truly Beis Yosef Glatt kosher.  Some have extended the Beis Yosef Glatt standard to include animals that were once only considered to be Glatt and have reduced the regular Glatt standard even more, almost to the point of Stam kosher.  Consumers must have a high level of confidence in the kosher certification of their meat.
Traiboring

One should bear in mind that even if the meat is advertised as Beis Yosef Glatt or Glatt, the kosher meat process does not end with the examination of the lungs.  There are many more steps that need to be taken before the meat reaches the homemaker’s kitchen.
Certain fats found in kosher domestic animals are forbidden by Torah law.  These forbidden fats are categorically called chailev, and are found in all varieties of cattle, calves, sheep, and lambs.  Fortunately, most of the forbidden chailev is found in the hindquarters of these animals.  In the United States and most European countries, the hindquarters are not processed for kosher use.  Nevertheless, according to Jewish custom, chailev removal includes not only actual chailev but also various parts of the animal that touch the chailev, fats that may be confused with chailev, and those parts whose nutrition comes from chailev.

Moreover, the forequarters of these kosher species contain various blood arteries, blood veins, glands, membranes and tendons that must be skillfully removed by a trained expert before meat can be kashered i.e., soaked and salted.  There are a number of reasons for their removal.  Predominantly, the veins, arteries and membranes must be removed because soaking and salting alone will not remove the blood.  Removal of these and other parts allows the free flow of blood from the meat during soaking and salting.  The removal process is referred to as “traiboring” in Yiddish, or “nikkur” in Hebrew.  The skilled craftsman is known as a “menaker.”

The art of traiboring is not new to the Jewish scene.  This tradition has been practiced and handed down from generation to generation.  Understandably, many communities have their own traiboring traditions with their individual differences and nuances.  The following portions of the forequarter are traibored according to the Baltimore minhag:

Baltimore Minhag:
Brisket
1. Two blood veins that run through the brisket
2. Veins on the inside of the brisket

Brust Deckel
1.  Gland that is found within the fats
2. Tendon that runs through the deckel (Litvishe udder)

Chuck Sections
Fat, veins and the artery located at the first rib

Pastrami
1. Veins that run through the pastrami
2. Fats that run on the inside below the vein
3. Pieces of cartilage attached to the breastbone

Neck
Two blood veins on either side of the neck

All meat and poultry must undergo a soaking, salting and rinsing procedure, hadacha umelicha v’hadacha, before the meat can be further processed.  This procedure must be initiated within 72 hours of the slaughter of the animal or fowl.  Some authorities permit the washing down of the meat within the 72 hour period to extend the time for the kosherization of the meat for another 72 hours.  Most Glatt-kosher facilities do not permit this practice, unless the meat was actually soaked in water for a half hour within the 72 hour period.  This extends the kashering time for the meat for an additional 711/2 hours.  The wash-down system has been severely abused and compromised in the United States.  There are places that have been known to use a spray mist or damp rag instead of water to “wash down the meat.”
The soaking process must be done in the following manner.  The meat must be soaked for a half hour in cool, but not freezing water (approximately 50°F and up).  The exterior of the soaked meat must then be cleaned of any visible blood and then salted on all sides with kashering salt. In the case of poultry, the inside cavity must also be salted.  The salt cannot be too fine, nor can it be too coarse.  Table salt or popcorn salt is not suitable for kashering meat and poultry.  The meat or poultry must be placed on a board or rack, which will allow the flow of blood from the meat.  The salt must stay on the meat or poultry for one hour and is then rinsed off three times to remove all salt and blood.
Since traiboring is not always done in a slaughterhouse, the fact that meat is slaughtered in a reliable slaughterhouse and is Glatt kosher does not guarantee the final kashrus status of the meat.  The process of traiboring and salting by a reliable butcher, kosher provision house, or homemaker must be done before it can be rendered as usable for the kosher home.  It goes without saying, if the meat was procured from a “kosher” slaughter which did not fully meet halachic requirements, even the most stringent traiboring and kashering would still leave the meat in a state of questionable kosher status.
Integrity and reliability, not “Glatt,” “super-Glatt,” or “Beis Yosef Glatt” labels or signs, should be the true guidelines for the kosher consumer.  All too often, the conscientious homemaker gets caught up in hearsay, fancy advertising, and fallacious claims without bothering to separate fact from fiction.  Therefore, it is always advisable to purchase meat that has been endorsed by a respectable rabbinic authority or kashrus organization.  It is certainly advisable to purchase meat and poultry from a butcher who displays genuine integrity and commitment to Torah and mitzvos, along with his reliable supervision.