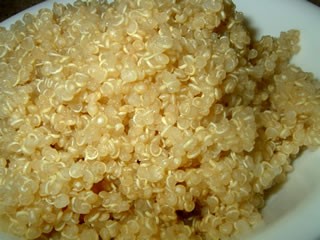 The following product is approved for Passover use.

What is Quinoa?
Quinoa (pronounced KEEN-wa) is a species of seeds of the Chenopodium or “goosefoot” family, and is botanically related to spinach. It was first brought to the United States from Chile nineteen years ago. Quinoa has been cultivated in the Andes Mountains for thousands of years, growing three to six feet tall despite high altitudes, intense heat, freezing temperatures, and as little as four inches of annual rainfall. Peru and Bolivia maintain seed banks with 1,800 types of quinoa.

Quinoa is Kosher L’Pesach and is not related to the five types of chometz grains, millet or rice.

If It’s Not Kitniyos, Why Does Quinoa Need Passover Certification?
We have found that quinoa can, at times, be either grown near barley, or rotated with a barley crop especially in Peru. Furthermore, barley on occasion is used to cover quinoa during drying, and the bags used to transport the quinoa may have previously contained flour of chometz. Therefore, quinoa should only be used with reliable Kosher for Passover certification or agency approval. STAR-K sent one of its mashgichim to a set of quinoa fields in Bolivia where there is no concern of intermingling with barley.

Please click here for illustrations and pictures of quinoa production and here for our 2013 webinar and video.

For more information about quinoa on Pesach, please see this article on the topic.

The United Nations named 2013 the International Year of Quinoa. Quinoa is one of the most nutritious foods on the planet, cooked like rice, gluten-free, and loaded with vitamins and minerals. Even NASA is considering quinoa for long-duration planetary space flights. Quinoa has become increasingly popular in the United States, Canada, Europe, China and Japan where the crop is not typically grown, increasing crop value.