The prohibited grain is called Chodosh.

What constitutes chodosh grain? Grain that was planted close to, during, or after Pesach, thereby taking root after the time of the omer sacrifice, is not permitted to be eaten until the following Pesach. This grain is called Chodosh, literally, new grain. One observes chodosh by not eating food products containing chodosh grain.

Grain that has taken root before Pesach, even if it is harvested after Pesach, is permitted to be eaten immediately, without restriction. This grain is called Yoshon, literally, old grain. When a yoshon designation appears on a label, it means that yoshon grains are used in the preparation of this product.

The prohibition of chodosh only applies to the chameishes minei dagan, the five major grain types, namely wheat, oats, barley, rye, and spelt. Although spelt is not commonly used in the United States, it can be blended in multigrain bread blends, or can be purchased as a health/non-allergy food product, such as spelt pasta. Chodosh does not apply to corn, soy, beans, peas, rice, millet, buckwheat, and other grains. 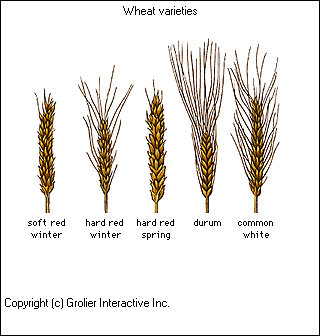 Winter wheats are planted in the late fall or early winter and are harvested in the late spring or early summer. Since winter wheat is planted before Pesach and is harvested after Pesach, it is always yoshon. Spring wheat is planted in the spring and is harvested in the late summer or early fall. Since spring wheat is usually planted after Pesach, one must wait until the following Pesach before the spring wheat becomes yoshon. Since the spring wheat, which is chodosh, reaches the marketplace at summer’s end, chodosh restrictions begin at the end of the summer and last until the following Pesach. Once the second day of Pesach passes, the prohibited chodosh grains are halachically transformed into yoshon grains and are permitted to be eaten. From after Pesach until the end of the summer all chodosh related problems cease.

One may assume that products made from soft red winter wheat are always yoshon. One should assume other products, such as bread, bagel dough, and yeast cakes, are chodosh.

The all-purpose flour available in stores is often a mixture of winter and spring wheats. Rye grain usually is never a problem. (Note: This is not to be confused with rye bread which is made from a wheat and rye flour blend.) Barley and oats always present a yoshon problem. Pasta products are made from durum wheat and have been a constant chodosh concern.

It is not possible for a farmer to plant a winter crop and a spring crop on the same land, since the spring crop must be planted before the winter crop is harvested. Given a choice, a farmer will always plant a winter crop, as winter wheat is more disease resistant than the spring variety, and is usually less susceptible to adverse conditions, such as drought. In the United States, approximately 75-80% of the crop is of the winter variety. It may be presumed, because of the abundance of winter wheat, that any product which could be made from either winter or spring wheat was made with winter wheat. That product can therefore be considered yoshon. If one knows that a specific product was made from spring wheat, then the laws of chodosh apply.

Since we have not merited the rebuilding of the Bais Hamikdash, and we have no korban ha’omer today, one may not partake of the new harvest until the fourth day of Pesach. In the shul of the Chasam Sofer, it was known that only a person meticulous in the fulfillment of this mitzvah was eligible to be called up to the Torah when the verses relating to chodosh were read. There is an opinion that chodosh restrictions apply only to grain grown in Eretz Yisroel. Another opinion asserts that chodosh applies only to the grain of a Yehudi. However, the majority of Poskim agree that chodosh still applies today to all grains grown in and outside of Eretz Yisroel, belonging to Jew or non-Jew alike. It should be noted that throughout Europe it was customary to rely on the lenient view because bread was the staple of the diet, and without it one’s health would have suffered greatly. The Rabbanim, therefore, considered this an emergency situation, and in emergency cases one relies on the opinion of a single individual. In the United States today, where yoshon products are available, “a conscientious kosher consumer should strive to get the best.” These are the words of the Chofetz Chaim, in Mishna Brura OC 489:10 MB 45. It is important to stress, however, that one who does not keep chodosh is not considered in the wrong. Rather, adherence to the laws of chodosh is in the category of hiddur mitzvah, similar to kosher vs. glatt kosher.

This brief article was intended to familiarize the public with the mitzvah of chodosh. Individuals who are interested in accepting upon themselves this beautiful mitzvah should accept it bli neder, in order not to create possible problems where no yoshon products are available.